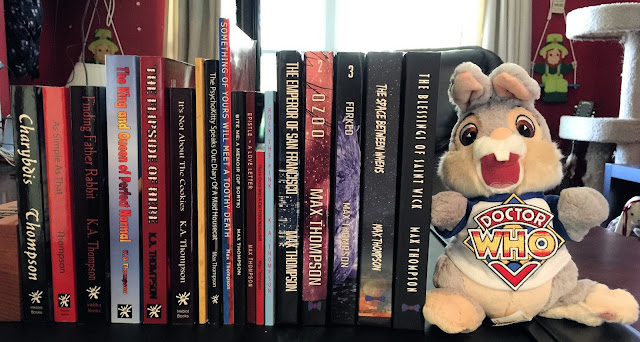 If I were J.K Rowling, Nora Roberts, Stephen King, John Green, or even E.L.fricking James, there's not a person out there who would assume that I did not work. The evidence is there, just look to the NYT Bestseller's List, or Forbes list of who drew the highest sales in any given year. THOSE people clearly work.

I'm not sure if it's the paycheck or the currency of one's name that seems to matter here. I'm guessing the latter, since the same people who think a midlist writer doesn't really work would also swear that the kid who asks them if they want fries with their fast food burger does work. Yet, I've heard it before: oh, you work at home? That's nice. You must have a lot of free time.

I got all stabby this morning over a private message suggesting that I fly halfway across the country to attend this thing for a six year old (because help was needed with kid wrangling) and before I could shoot back, "Oh HELL no," the next thing said to me was, "I know you have time since you don't work and all." Also, it's going to be a LOT of fun, because you like kids and this is the only time my kid is going to do something like this.

We won't even get into the impropriety of asking a virtual Internet Stranger to come spend an afternoon with kids, the implication being that you're going to spend some time alone with some of them. I don't care how long you've been talking to someone online, you don't know them well enough to expect them to freaking buy a plane ticket, get on the damned plane, and be happy about, apparently, babysitting a bunch of six year old kids who are participating in an event that holy fricking hell, will surely happen every damned year (private school play/talent show/post-show party. I dunno. I stopped paying attention to the details.) It doesn't matter if you love my cat, love my writing, had fun chatting with me: you don't know me. Why the hell would you trust me with your kid?

Yes, what pissed me off was "You don't work."

I work, in fits and starts, a good 60+ hours a week. Some days are longer than others, because I do take time to go outside and be a semi-normal person on the days the Spouse Thingy is off, and often I'm at Starbucks, which doesn't see like working, but... I work.

Pretty much anyone who works from home is, SURPRISE, working.

It's fun, but it's still work.

#WhyIHatePeople.
I don't understand where the idea "working at home means you don't really work" came from - I mean I work days, nights, weekends, holidays...and I know you do too. And being an author is HARD. Writing is HARD. Well, good writing is, anyway. :) (which of course yours is - VERY good)
I barely have enough hours in the day to take care of my extremely demanding (and screamy tantrummy outbursty) son, do the absolute minimum of housework possible, and still get enough work done to get us through another month.
WTF WITH AHOLES LIKE THAT PERSON. Anyway hell with them, WE know how hard you work and I have the books of yours on my shelf to prove it. So there. xoxoxo

Aww a stay at home mommy wanted a babysitter? How precious. She should put down her bonbons and wrangle her own kids for a change since she obviously has all that time on her hands. See what I did there?

Pfft. Just getting out of bed when in Fibro flare is fricking W O R K! Add arthritis like mine and it's crawl back into bed after 10 minutes.
Take no heed of the Ignorati.

You know, if someone who never met my children was excited to fly across the country to be alone with my child, I'd be really nervous.

As for "not working" that idiocy has been going on forever. Just as any woman chooses to raise her children without a paycheck

Andrea and the Celestial Kitties said...

But.. I thought Max did the writing.. I feel betrayed! ;)

Honestly, those who work from home usually work TWICE as hard as someone in an office or something. I know that my mom (and now I) work a good 12-13 hours a day. Especially in the run-up to a con. I get it.

OF COURSE MAX DOES THE WRITING I'M JUST THE TYPIST!!! OK???