I almost have no words...

This was bad enough; I spent some time on FB last night talking to Charlie, less about the election and more about the fallout, and the biggest issue for them is their youngest son. He's going to school overseas--a move made because he was being endlessly bullied for who he is, and he just wanted to go back to the place where he felt most safe--and he's telling them now that he doesn't think he'll ever come back.

"He's 17, bisexual, a bit on the flamboyant side, and has been a target since he was a little boy. When we took the kids to England a few years back, he relaxed. He was treated fairly, and no one cared that he was this unique, multi-racial kid with a penchant for blue hair and ballet. Within days of returning home, however, the bullying began again. He wanted to go back, to live with Erin, and finish school there. Instead, we went with him and have just been going back and forth, and my dad is staying home to be there for Alex and Rachel.

"We always thought that once he was through school, and grown, he would be comfortable coming home, but the morning after the election, he was on the phone with us, literally crying. He doesn't think he will ever come back, and as of right now, we're inclined to let him make this decision and support it any way we can."

I floated around online a lot last night, and kept seeing similar messages: people are truly afraid. I have gay friends who are now terrified that their newly-won right to marry will be taken away. Friends who worry that they'll be deported--even if they're here legally--and one person who is legitimately afraid that if he's deported, he'll wind up beheaded, because of who he is.

As of last night, it was just fear. I read post after post of people who are deeply afraid.

But then this morning... 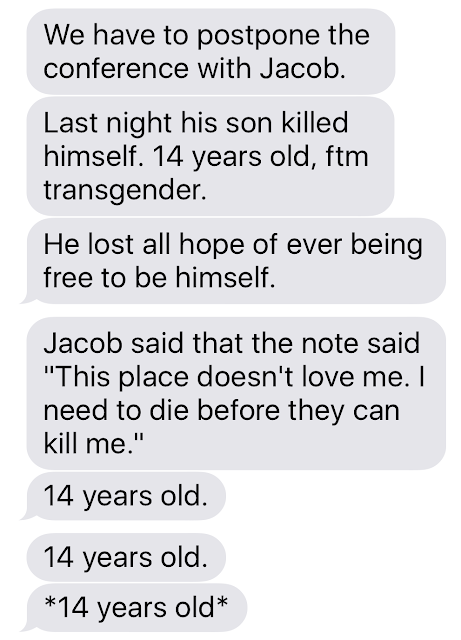 I was supposed to meet Jacob next week during an investment conference in San Francisco. That it's postponed, fine, in the grand scheme of things it's a ripple in a very big pond. If it had been postponed because of the holidays or a mood swing, or the weather didn't suit all of the participants just right, it would be fine. It's not a life or death thing.

But this...the reason it has to be postponed.

Right now, there are a significant number of people who don't think it will get better. They're positive that it will now get worse.

I have no answers.

I don't know what the answer is either. And my heart breaks for Jacob and his family....how horrible. I think what I am holding on to is that this is a minority of people who are acting out thinking they are "right" and that is will end soon....but not if those in charge don't take a stand. scary stuff

My heart breaks for everyone who is unique, dancing to the beat of their own drum,in essence, anyone who thinks, believes in self expression, and respects everyone, no matter what the other people believe. Tolerance people. How sad that so many have forgotten what it truly means to be human.

I am in tears. This is the rawest... yeah, I have no words now
Vicat

I am so sad for the community of people who don't want to live. I understand that. I do. I want to hold all of them and tell them it will be alright.

Remember, as a writer you have the power to shape the lens through which others see the world. Keep writing. Keep writing hope.

I gave no answers, either

How incredibly sad that these two young men felt and feel so ostracized by those around them that they can't live in this country. In one case this has been going on for some time and the fact that he feels accepted elsewhere, it's good. To the young man who felt so hopeless that he killed himself, my heart breaks for his family.

We have to have open minds and open hearts. I may not agree with you, your lifestyle or choice of partner, but I will never not allow myself to give them the chance to be who they are. Our country was founded on freedom, we have to keep it that way.

I am sorry for the death of your friend. Fear causes many sad choices. Had he chosen to live, he might have found peace and hope and an important voice for himself and others later in life. But I respect his decision.

All we have is our own lives. I think we have the right to use them as we choose and end them when we choose.

Governments do not own us. We create THEM. The concept that The State exists of and for itself is abhorrent to me.

We can sometimes think that a better decision could have been made, and, and caring friends and family, even try to discourage that decision. But the ultimate right to control our own individual existence is not something I will argue against.

I'm sorry. This hits too close to home. I'm in tears because this effects our own immediate family. I have no words, but thank you for writing yours.