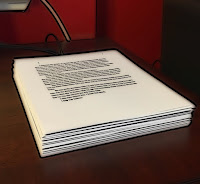 The first draft of this book--including roughly 10 passes through it to make additions and subtractions and to hunt adverbs--is done. The file is off to my editor and a copy has been printed out for the Spouse Thingy to proofread (and yes, Charlie, I will send you one to proofread, too.)

Unless you count a manuscript I wrote in high school--and I don't, though I may rewrite that one someday--this is my first venture into young adult fiction, doubled by it also being light science fiction. Add to it the pressure of this being Max's book (and he sat on the back of my chair, thumping his thinks into my head using his tail during a large chunk of the writing) and I'm about 13 kinds of nervous.

I'm also about 13 kinds of excited so while the editor tears it apart (and she surely will; I left a lot of stage-direction type things in the narrative for...reasons...and it's dialog-heavy [which she expects from me but that won't stop her from pointing it out] ) I'll dive into taking notes for the next one.

I realized during one pass, while I was hunting adverbs, that I used some familiar names; one was intentional, because a friend really wanted to be a princess, others were not but I'm not inclined to change those names because they fit well. I do need a female name for a queen that shows up toward the end but will be in the next book...she may or may not be a little bit bitchy, but she will surely be somewhat flaky and unsure of herself.

Who wants to be the possibly bitchy but surely not-great-at-the-job queen? I don't want to keep the name I used as a placeholder; it fell into place because I had the TV on and when I glanced up Raven Simone was on the screen and it was like, "phkit, I'll use that for now." Not really feeling that choice.

The first draft of Max's first piece of fiction is in the can, but needs a character name.

Possibly a title, too...

I would love to be a massively bitchy, really sucky queen. But you have to get it right, it's spelled with an E, but the E is silent, lol.

I have read everything you have written to date that has been in book form. I can't imagine this not being as wonderful as everything that has come before it, be it young adult, Max's thinks, whatever. It will be great!!!

I'll be an evil queen!!! Feel free to use any variant of Rebecca or Rachael (well, keep Rachael as is please)

I'll also volunteer as a character - the name is spelled Caroline (as in Sweet...), but pronounced Carolyn (rhymes with sin.) And believe me, on a bad day I get super cranky when someone either misspells or mispronounces it.