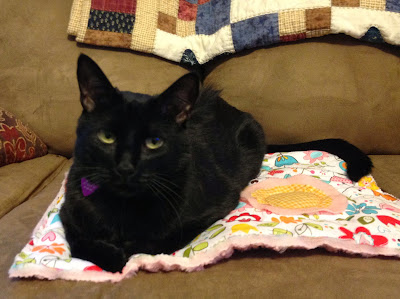 ...decided that my fingers tapping away on the keyboard was an invitation to jump in my lap and give writing a try of his own.

I don't know what he did, but Word opened a couple of extra windows...and closed out the one I was working in.

No horrible loss, I'd only tapped out about 1200 words and they were not great, so it was only an evening's worth of work. I poked his bony ass and made him move, closed out the extra windows, and opened the directory to where the manuscript is saved.

I opened the file...

...and nothing. Nothing since November 2nd.

Buddah managed to delete about 7,500 words worth of work. I was already behind on NaNo, now I'm really behind.

I was mad for about 15 seconds, and not at Buddah; he didn't do it on purpose, and I should have saved it to more than once source, like I did the first 1500 words, the ones I still have, in a cloud file.

Rather than throw the laptop across the room, I put it down, fed the cats 20 minutes early, eyed the booze in the fridge, and then decided the hell with it. What I'd written was nowhere near what I intended in the first place, and there are still 3 weeks left in NaNo. I've written a hell of a lot more than 50,000 words in less time before.

So it's a challenge.

I'll never forget very early in my nursing career, I made a floozy of an error, and my d.o.n. (director of nursing) after talking with me said.."Now you can either get all crabby and shut down or you can find a way to turn it around...grow or grumble it is your choice" It still sucks, BUT in a crazy kind of way it makes disasters sort of exciting to see what wonderful thing will come out of it!
And maybe Mr. Smugness there is trying to tell us that!

It is amazing that they can do with paws! Wizard use to shut the PC down!

He just wanted to halp, or work on his neglected blog, or just generally pounce stuff. But like you said, you've written far more in less time.
I'm saving docs to dropbox every time I close because I never know when I'll have another collosal crash, or system assasination.