A lesson in snap judgment... 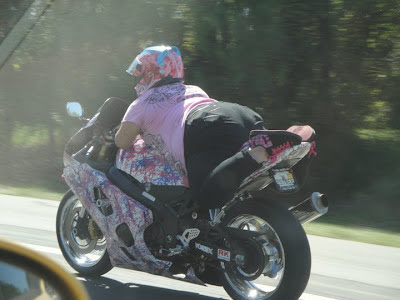 A day or two ago while browsing reddit/r/motorcycles, I clicked a link and it went to this image. Hundreds of other people did the same, and I think it's safe to say a lot of them had the same first thought that I did.

Moron...that's a good way to get yourself killed.

There's so much wrong with this: let's forget about the lack of gear, the riding position alone does not afford a rider any reaction time if something goes wrong. One hand on the bar, feet no where near the pegs...one tiny thing goes wrong, that's a rider who's going to have a bad day.

I shrugged it off and was going to scroll down to other links, but then I clicked on the comments.

Her name was Charity Rivera.

I don't know when the picture was taken; someone commenting mentioned that it was an old repost, so it may have been taken a month ago or a year ago. But in June of this year, she died on a ride; somehow—I'm not suggesting at all that she was riding in that same position—she lost control of her bike, crashed into a wall, went over it, and fell 20 feet down.

Her helmet was on the bike, but she was not wearing it.

Not that I condone the way she was riding in the picture someone took while passing her on the road; I don't. But it was her choice, and I'm betting she understood the risks she was taking.

I will never ride without a helmet; I'll never ride without a full faced helmet. That's my choice. I support someone else's right to ride with a half helmet, a shortie, or no helmet at all. You get on a bike, you know the risks. You make your choices and accept the risk that comes along with it. You know that the half helmet leaves a good part of your face exposed and it might very well get ripped off if you hit pavement; it's your risk to take.

I usually ride in full gear: boots, kevlar lined pants, armored jacket, m/c specific gloves, and helmet. But once in a while, if we're heading just down the road, I'll ride in regular jeans. I might not put the jacket on. I accept the risk. Hitting the ground at 30 mph is going to hurt, but I accept that. If I'm heading out of Dixon, I gear up. I don't want to hit the ground at 45 and up without gear.

My knee jerk reaction to the picture, though, I don't think it was fair. Riding like that, it was her choice. She undoubtedly knew the risks and accepted them.

Sometimes we make the wrong choices. And when we do, we leave behind people who bear the worst of that. But still...those are our choices to make, and for someone else to grunt “Moron...”

There is a very good reason that I find you so AWESOME! This is it. You are willing to look at your judgments and accept that you might have made an error.
Dan would ride without his leathers in his own home town. Any place else it was leathers. Full helmet. For anyone on his bike with him it was full helmet. He made me wear boots and long sleeves when he couldn't find leathers to fit me.
But you are right. Those were his choices. I understand when others need or want risk. It is theirs to take. We don't have to agree. But we don't wear their shoes and we don't know their histories.
You are AWESOME!

Yeah, we all take our chances. Not putting on our seat belt, not paying attention while out walking, tuning out what is around us while walking.

I for one prefer my transportation with four wheels and haven't been on a bike in ages, not even as a passenger. Used to do it all the time.

Some people do deserve the title of "moron" regardless of what happened. She was riding recklessly and indirectly she was a danger to others by riding that way. It's one thing to not wear leathers or a helmet but another if she lost control while riding like that. Not cool.

I will say what I find interesting is the crash that killed her was caused by another Motorcyclist. She took the gamble and lost. It is unfortunate but I do not think tragic as she know the risks.

I think many had the knee jerk reaction of 'moron', but you are right. It was her choice and who am I to judge!