During my mushroom misery this weekend (which wasn’t half as bad as I feared, but still knocked me on my ass a few times) I spent a lot of time surfing online, mostly looking for LOLz, but after a very-late-night text conversation, I started looking for information on aspartame and pituitary tumors. Most of what I found was the typical !!!ASPARTAME IS EVIL SO SEND ME A DOLLAR TO KEEP MY WEBSITE GOING!!! crap, but hidden amongst the noise there’s some very level-headed information out there now.

In that, the common thread seems to be “we can’t say 100% for sure, BUT…” And the Buts are fairly compelling arguments against consumption of artificial sweeteners of any sort.

I’m a soft drink addict. I can live without caffeine (and after this weekend’s Diet Mt Dew inspired insomnia, I’d like to live without it) but I’m completely hooked on diet soda. I think it’s the fizz, but for all I know it’s the aspartame. I often let the idea slip into my head that I just want to cut the soda out of my life, but then I start feeling all twitchy and sad and never get around to even trying. 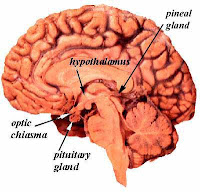 But this weekend I stumbled across a little nugget that made me sit up and think a bit. And I wish I’d bookmarked the site, but it was late at night and I wasn’t thinking beyond “Hey, this kind of sucks.” And what kind of sucked was seeing in black and white that since the introduction of aspartame into the market, there has been an increase in pituitary tumors, especially the more rare of the almost-always-benign pituitary tumors.

That would be me, she of the very rare lymphocytic hypophysitis, a tumor normally seen in women who have just had their first baby. I was 40, and my baby was all grown up. Yet after diagnosis and trying to not freak out and having the sucker yanked out of my head, that’s what I had. A very rare mass of goo stuck to the underside of my brain.

Did the aspartame cause it?

I’ll never know. But it’s interesting to ponder, in a Well Hell I Might Have Done This To Myself kind of way. And that just leads to all other kinds of speculation.

Like aspartame and weight gain. I only take in about 1500 calories a day, and I walk my ass off, but I’m hefty.

Aspartame and chronic pain. Can we say “Fibromyalgia and Chronic Myofascial Pain Syndrome?” I knew we could…

Aspartame and IBS. I found several mentions from people who cut it out of their diet and their issues with IBS cleared up.

I’ve always blown off the naysayers of artificial sweeteners, mostly because they come bearing information wrapped in alarmist paper. If it’s presented with a dozen exclamation points, if it’s presented in an overly loud manner, I’m not paying attention. I’m just not.

Have you tried flavored seltzer?
I cannot tolerate aspartame at ALL, violent headaches shortly after I have it...it's even in gum...the stuff is ubiquitous.
Trish

There is plenty of anecdotal evidence to make me stay away. The tinfoil hat story of how aspartame passed the FDA is scary enough, if you get into conspiracy theory and the appearance of bribery. Some airlines won't let their pilots fly and drink aspartame-laden drinks. There's a tale of an office that offered free Diet Coke, and the entire office started to show MS symptoms that "spontaneously remitted" after the Diet Coke was taken away. I say best to stay away. Jeni and I have struggled to give up all soft drinks, but feel so much better after the detox. Good luck!
--Dean

For me it is giving up caffeine that hurts. It throws me into massive headaches that last days and into weeks. I have even tried to cut back and get that reaction.. I know it is suppose to be temporary, but a month seems like a long time so I give in to more!

Hmmmm is right, especially in regards to IBS, which I have.

For years I drank nothing but clear sodas (no coke or anything dark colored ), but a few years ago I went back to diet coke and then added one caffeinated soda per day. I've been reading bad things about artificial sweeteners (even Spl*nda) and I am considering giving up all of it.

I'm not going cold turkey, but I am going to have to cut back. It'll be a real problem when I have breakthrough on my DI meds... we'll see how well that works out...

I'm with Dean on the evidence. I find that I eat more the evenings when I give into diet soda--and nothing else changes. I tend to fill up with a full sugar soda but diet tends to make me hungrier--especially for really really sweet foods that I don't normally crave otherwise.

I've been working for 2 years to get my fiance off of diet coke, and I'm just now making a bit of headway. Granted he's been using the Mio water flavorers, which have artificial sweetener, but I'm hoping he's using less of that per drink then he gets with soda. It's been a slow battle of introing him to new stuff. But I'm getting him there. It's not easy for him, he is picky and gets caffeine headaches. And though it's not fun for me, my kidney stones give him graphic input to exactly what could be in his future if he doesn't kick his 12 - 2 liter! - bottle a week habit.

I avoid all artificial sweeteners like the plague. Always have. It's not because it makes kidney stones or ibs worse in my case. That's just a bonus I get for avoiding something that tastes like sicky sweet death in my mouth :P If anything I try has it, be it splenda or sweet & low... I know it is there, and it is disgusting >.<

Oh, and I drink full sugar 7up, in regular and cherry. >.> I let myself get away with it for now because I suck at drinking water (I'm supposed to drink so much fluid I slosh, but I just can't seem to do it) and because 7up has some of my kidney medicine in it and my kidney specialist had a very enthusiastic response to my drinking it. And I can vouch that in the past year, I have not really gained any weight, probably lost some, while my guy has gained some >.>

Due to odd circumstance, I only drank a diet pop for awhile on Sundays. Come Monday, my right arm always hurt. I dropped drinking diet soda. Now I've dropped drinking soda altogether but I really missed the fizz. Sometimes it's just refreshing. I bought club soda. If I want it to taste, I use half fruit juice and half club soda. Great way to keep the carbs down when drinking fruit juice and still get that fuzz. Now because of blood pressure I've had to cut caffeine too so this was a great alternative when I had to have something different than water.

I have learned the hard way that I just can't tolerate artificial sweeteners much at all. If I have a diet drink or even more than one piece of Extra gum, within a few hours I have a stiff neck, numbness down the arm, and a raging headache. Which bites because I love Sonic's diet Cherry Limeades AND I love Extra's Polar Ice. I know that some people are just more sensitive than others, so not everyone will be affected the same way, but it's really bad for me.

There's this book called 'Take Charge of your health and escape the sickness industry' that you can buy online. It's by Elaine Hollingsworth and it is packed with facts and research. It covers many things including aspartame and soy (boo, hiss). You should get yourself a copy and then start picking things to take out of your day to day life. sigh...

Caffeine - I so need this, although I've got a balance going now at work. First mug of coffee - proper coffee (not decaff). Need that to wake up. Rest of the day - fake coffee (decaff). If I have proper coffee all day I bounce off the walls.

Aspartame - same, I'm a diet coke person. Dislike the taste of fatcoke out of cans but bottles are ok. And ... I have something like IBS that gets set off by stress and cheese. Plus I'm bigger than I really should be.

Chronic pain - yep. I have a bunch of old half healed injuries that take it in turn to remind me they're there. Could be aspartame linked.

I might try switching from Diet to FatCoke for a while, see what happens. Fingers crossed - It will let me get addicted to pizza again :-)

PS Gluten Stuff is another thing I'm thinking might be causing me problems ...