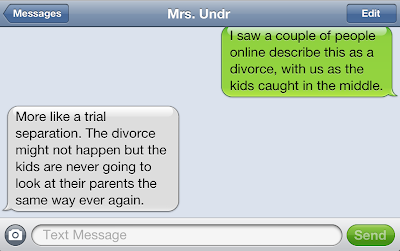 You've probably heard, Komen issued this statement this morning, which is being held up as a reversal to their de-funding Planned Parenthood and a rewriting of their grant criteria.

One of the things that has bothered me the most about this whole thing is the seeming condemnation of Planned Parenthood on the part of Komen; using their new criteria of not granting funds to groups under investigation, they cited an apparent investigation of Planned Parenthood by Rep Cliff Stearns for the possibility of PP having used federal funds to provide abortion services.

The problem with this is that there hasn't been an investigation; at best it's an inquiry, and a hearing has not been, and may never be held. So it felt to me as a declaration of presumed guilt until found innocent.

One line in today's statement jumped out at me:

We will amend the criteria to make clear that disqualifying investigations must be criminal and conclusive in nature and not political. That is what is right and fair.

To me this reads that the changing of the wording of their criteria now means that there now must be an actual investigation, it must be criminal, and there must be a conclusive end--proven guilt. And that sounds good.

In an article by Greg Sargent for the Washington Post,  Komen board member John Raffaelli came straight out and said that the "reversal" doesn't mean Planned Parenthood will get funding from Komen. He told Sargent "It would be highly unfair to ask us to commit to any organization that doesn’t go through a grant process that shows that the money we raise is used to carry out our mission."

So really, Komen caved but didn't reverse. They tinkered with the wording of their funding criteria, but it doesn't really mean anything for Planned Parenthood other than that they can apply for future grants.

Fine. I can almost swallow that.

Now they need to admit that the masses are not collective in stupidity, and that the whole mess was indeed political, and they need to get Karen Handel, the likely arbiter of this all, to resign. And if she refuses to resign, fire her sorry ass.

The statement issued by Komen was enough for a lot of people; walkers who were on the fence, agonizing over whether to walk or not, feel a little better about honoring the commitments they've made to the organization. and they should; their hearts are absolutely in the right place, and they're willing to put forth the effort needed to hold up their end of it.

I don't think fundraising is going to be a breeze, though. Komen hosed things up royally, and potential donors are taking a long, hard look at Komen as a whole and many don't like what they're finding.

I'm not sure anyone other than someone who has participated in a 3 Day, especially as part of a team, can understand how truly devastating this has been and how much it hurts. It's easy to sit back and say that Komen will never get another dollar, that Komen is antithetical to its mission, that Komen is overfunded at the top and money doesn't go where it should. It's easy to say those things when the people who are on the ground, literally walking the walk, haven't become like family.

Char and I texted back and forth a bit while I walked today; she's recovering from hip replacement surgery and today is day one of clear-headedness and she wanted to talk about it, wanted to know what she'd missed, because one day she'd like to be able to walk in something. And she's right; while this might not feel exactly like a divorce, as I've seen some people online describe it as, it's definitely like a tense trial separation.

The walkers and crew...we're like the kids caught in the middle. We have one side that screwed up and is scrambling to apologize without really changing anything, the other side screaming about betrayal, and we're in the middle with our hands over our ears, begging them to stop fighting and start talking.

I think before that happens, both sides have to let the anger subside a bit, the hurt sting a little less, and then they have to find their footing.

Will I walk for Komen this year? I have no idea. I haven't formally pulled out of anything, but the walk I signed up for isn't until late November, so there's time to see what's really going to happen. I'm not going to fund-raise for it until I know for sure. I will likely walk in the Avon Walk in July, and I'm still eyeing that MS Walk in September.

Will I support my friends who are definitely walking and crewing for Komen?

These are women I've come to love; they aren't playing with politics, they're interested in saving lives. And no matter what happens with Komen and Planned Parenthood, what the actual monetary split between administration costs and research and treatment is, whether a bucket of fried chicken carries a pink ribbon on it or not, lives are being saved.

I am feeling very emotional sitting here in the airport waiting another hour to board. You said it all Thumper. This was a pretty awful few days and fundraising will not be easy! Some of my supporters will never support Komen again ... and some of my sister teammates are considering not walking! I will walk again in Dallas. I believe in SGK ... and I believe there's some "cleaning out" to be done. We will see!
R

Thank you for making this more clear. I had just read a headline that they had reversed their decision on PP, but had not read the article.

It is so bad that there seems to9 be a war against poor women getting any kind of health care. It is as if since they have no money they are not worth helping. Health care should not be a political issue. Everyone should have health care available to them. I will no longer support the Komen foundation and I am sorry for it. I will do my best to find a better way to support breast health in the future.

You have a good heart Thumper...whatever you decide, you have many people supporting you & your involvement.