As soon as the Spouse Thingy gets up tomorrow--well, as soon as he's awake enough--we're hitting the road and heading for South Lake Tahoe. Everything is packed and ready to go, I just need to go gas the car up in the morning and probably clean the crap out...because we're taking his car, and I'm not sure he's entirely grasps the idea that just because you drop something onto the passenger floorboard, that doesn't mean it has to stay there until you carry a passenger....or more specifically, a passenger other than one's wife, because he doesn't seem to care if my feet are bothered by his used Kleenex and gum wrappers.

We're taking our laptops--the hotel has free wi-fi...free y'all!--and a digital camera, so hopefully we can post a few pictures. And hopefully the pictures won't be of me bent in odd angles, hanging off of a ski lift.

You know if I'm dangling off a ski lift, he's going to take pictures...

The cats are curious about what's up...the bags are already by the front door, and I put food and water in the master bathroom, figuring that closet is where Max is going to hide from Butters. The Boy will be here while we're gone, protecting the premise from out little town's gang of thugs. Which, basically means he'll sit here and watch TV while he does laundry, because our little town's thugs are mostly teenagers who cut school once in a blue moon to go to Burger King for a Whopper...presuming they don't get kicked out, because random kids in the fast food places during school hours are pretty much ratted out.

But...WooHoo, we're going skiing! Yay for the Spouse Thingy having a schedule with a couple of weekdays off. One last shameless pimping of my son...

In two days he's jumping into icy cold water, possibly while wearing a shiny striped cape and mask, and he'll do it SOBER...all to raise money for the Special Olympics.

So yeah, I'm tossing it out there one more time hoping to raise a few more bucks.

2010 Polar Plunge. If you have a buck or two in spare change lying around, please consider a donation that funds not only the Special Olympics, but the joy I will have in knowing my kid is shrinking all his favorite parts for charity. 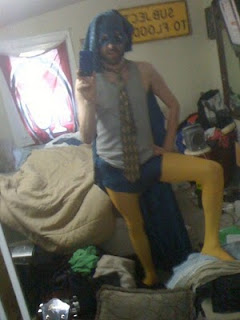 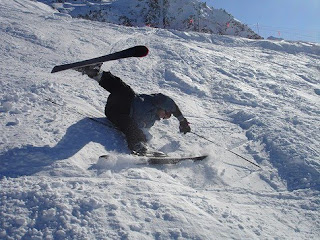 Next week, this will be me.

For years, the Spouse Thingy and I have talked about giving skiing a try. Talk is all we've done, though, even though we live just a couple hours away from at least a dozen premiere ski resorts.

So now that the ski season is damn near over, we've decided to give it a whirl. He has a couple of weekdays off instead of weekend days--which means he doesn't have to put in for time off, which seems to be kind of hard to get right now--so we're counting on there more being a royal crush of people, and we're going to head up to Sierra-at-Tahoe near South Lake Tahoe, take a cheap beginner's class that includes equipment rental, and we'll try to not die.

You know what's going to happen if we don't die, right?

We're going to love it. And then the snow will melt within two weeks, leaving us until November to be able to do it again.

The Spouse Thingy and I have been making major efforts to lose weight; we started back in late July with Jenny Craig ( he's still on the JC program; they kicked me out in September) and have both made some decent progress. I'm down 49 pounds and he's close to the same. I'm thrilled to be down 49, but...

Today is my "official" weigh day, and I had really hoped the scale would have inched down another notch, but it was exactly the same this morning as it was last Thursday.

Granted, this week has been hell on my body water-wise; I had a water weight swing that totaled 10 pounds, skipped meds a few days early and peed off 7 of it, and skipped them again last night hoping that would take care of the rest of it. But, the breakthrough wasn't as strong as I hoped, I didn't get up as many times (like earlier in the week) but theoretically I didn't have as much to shed, so that's not surprising.

Still, I'd hoped to get on the scale and see it down a pound from last week.

I'm getting frustrated. My week to week average has slowed down and it feels like I have too many weeks where I don't lose anything. I can look back and see that I did lose weight, but it sure as hell doesn't feel like it. (Cue my inner toddler having a temper tantrum.)

I can't eat less than I do; I'm at 1200 calories a day and I know better than to routinely go below that. It happens; there are days when I look at what I've had through the day and I'm 100-200 calories short, but for the most part I take in 1200-1300 a day. I should be able to sit here and drool and still lose weight at that intake.

Yes, I know what the logical answer is. Just because I know it doesn't mean I want to do it. I want to sit here and drool and drop the poundage, not exercise and drop it.

We went out yesterday and bought a treadmill; it'll be delivered tomorrow and hopefully the Spouse Thingy can put it together for me early next week. I don't want to sweat, but at least I can sweat and watch DVR'd Dr. Oz (whom I now see with pointy ears and pointy shoes, thanks to my son who pointed out that Dr. Oz looks kind of like an elf...)

Next week, barring medication complications, that scale will show a drop and I'll hit 50 pounds lost.

Hold me to it.

I'm over the cold for the most part, at least I'm not coughing my head off and not plastered to the sofa wondering where the hell the cabana boys with my Popsicles and chicken soup are. I got whammed while I was suffering with (let's be delicate) with the mother of all female-type problems, which didn't make things any easier, but gave me lots to whine about about.

Then yesterday, just in time for Valentine's Day, I got whacked with a killer headache. It rode on the coattails of my DDAVP working a little too well...yesterday morning I was 9 pounds heavier than I was just a couple of days before, a nice sign that I'm retaining enough water to quench the thirst of an entire football team for three or four days.

So I did what I usually do. I skipped my meds last night and resigned myself to a night of getting up every 30-45 minutes and measured drinking of fluids, typically 64 ounces. I could suck down a whole lot more when my meds wear off--I will steal the soda right out of your hands when that kind of thirst hits and I probably won't apologize because I'll be too busy trying to find something else cold and wet to suck down--but the idea is to shed the water weight.

Only problem is that I only got up every 90 minutes, and drank all of 3 ounces. Good, but not ideal. It wasn't until after noon today that I was obviously free of DDAVP, peeing like a maniac and drinking like a fish.

As the thirst ramped up and the water weight started to come off, the headache--untouched by Motrin--began to abate. It's still lingering, little fingers of watery death poking at my brain, but it's getting better.

I need to ask my doc to switch my meds, I think. This is happening more and more often, although typically without it being quite that much water and without there being a pounding headache.

But! The weather is awesome and looks like it will be over the next few days, so we're taking the bikes out and riding tomorrow. Maybe even Wednesday, too.

Sorry to point it out to the snow bound, but it hit 70 here today.

In a Nyquil-drenched dream last night, the Boy threw open my bedroom door and gifted me with a life-sized likeness of my own head. Wrapped in foil. Face covered in soot. With bedhead. So that I could "remember what the nursery was like."

No, I don't understand it at all.

In other news, I think Death frenched me as I slept last week, and I've spent the last 7 days with a blowtorch burning in my throat, a nasty cough, and fatigue that's starting to feel like part of my DNA.

It's totally me, right? 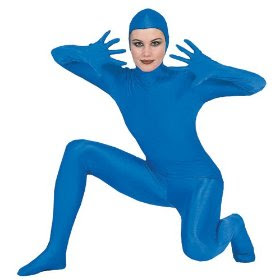 Hungry? Tomorrow from 6 am - 2 pm you can get a free Grand Slam at your local Denny's (that's Tuesday, Feb 9th, 2010.) You'll still have to pay for your drink, and don't forget to tip on what your total would have been, but otherwise...free!

It's not exactly diet-friendly fare, but we're thinking about going anyway. One big meal will not kill the diet. It just might mean that I won't hit 50 pounds lost this week. I can live with that.
Posted by Thumper at 2/08/2010 11:18:00 PM 5 comments:

Clearly, IKEA was created by minions of the devil.

There is no other explanation.

First, they trap you in the maze; you enter and begin to browse, but you have to follow the designated path to get from point A to point B, lest you miss any of their fine, fine furniture and textiles. Oh there are "shortcuts" but those are always blocked by little old ladies on scooters with dead batteries, or groups of non-English speaking tourist who don't grasp "May I get by you, please?" Nor do they get, "Move you ass before I drop kick it."

So you walk. And you walk. And they tease you with blue signs with arrows that proclaim "THIS WAY TO SELF CHECKOUT," and since you're thinking "I damn well need to check my self out of here!" it's a welcome sign.

But alas, it only directs you deeper into the maze. Because without the maze, you might miss the fact that you can buy MALM chests of drawers in FOUR DIFFERENT SIZES! or 523 different brightly colored duvet covers!

Eventually, you realize you are almost there. You're waking through the warehouse of boxes, with the checkout registers RIGHT THERE, and you know that you'll be able to pay for your treasures and get the hell out.

Then you are tortured with the aroma of freshly baking cinnamon rolls. And your mouth begins to water. And you want one. So badly you want one.

But you're dedicated to losing weight.

But they smell so good.

So you do the only thing you possibly can. You pay for your stuff, step just beyond the cash register, drop to the floor, and curl up in a ball of quivering, hungry, dieting flesh, and then your head explodes, because they never intended to let you get out of there anyway.
Posted by Thumper at 2/03/2010 10:22:00 PM 12 comments: