How I A Kitty-Whipped, Part Duh

Dear Lady In The Library...

Um, yeah, it was a bit disconcerting to have you walk up to me and squeal with delight, asking in one breath if I'd ridden my bike in such gloomy weather and then how much fun it was; while you were practically peeing yourself, I was trying to figure out where I knew you from and why I couldn't recall your face or your name. I scrambled to reach the places in my brain that are covered in cobwebs and dust, thinking perhaps we'd known each other somewhere along the way of Life On Military Bases. Did our kids play with each other when they were little? Did we bowl together at some point? Do I have a stalker?

It did give me a bit of relief when you stopped long enough to realize you were confusing/scaring/annoying me, and then explained that you'd seen me riding around town on my little white bike. And that it was totally cool, especially once you'd figured out that wasn't some random guy on a bike, but a middle aged woman riding a =gasp= motorcycle. And now here I was! In the library!

While my brain was further puzzling over how you knew it was my drag-king self under that full faced helmet, you then laughed at yourself and further explained that my red, white, and blue leather jacket was hard to miss (which made me happy, because that means I'm visible enough that car drivers can see I'm there...) and you'd see it zipping down Peabody Road or Nut Tree every once in a while.

When I stopped being confused/scared/annoyed, it was nice to talk to someone else who was excited at the idea of taking up riding in middle age. (But no, I will not teach you how to ride; I'm still far too inexperienced myself. And no, I will not sell you my spiffy red, white, and blue leather jacket. I've never seen another one like it, and wouldn't be able to replace it. And I loves it, I really do. Well, maybe for $5,000...) If and when you decide to take the MSF course and get a bike, I'd love to ride aroudnd town with you. It'd be fun; we can start our own little Old Chick Biker Gang.

"Thumper" Is Latin For "Kitty-Whipped..."

Buddah is not an especially vocal kitty. He reserves speaking to me for those times when he wants or needs something; most often he speaks up when he deeply needs to have a toy mousie tossed down the hall or the stairs so that he can run after it, pick it up, and bring it back so that we can do the whole thing all over again. His fascination with the game of Go Fetch makes us wonder sometimes if he's not Hank the Dog reincarnated.

Hank could never understand the intricasies of fetching; if you threw a ball or a stick, he would run after it, and then sit there, his head tilted, tongue hanging out as he dripped saliva onto the grass. Hank the Dog was more like Hank the Cat; he napped ferociously, lived for food, and if he hadn't weighed 100 pounds he would have spent every available moment in someone's lap.

I think Hank had a species identity problem; if he could have been surgically altered into being a cat, I think he would have happily gone under the knife.

So maybe he wanted a do-over, and came back as Buddah.

Only Buddah seems to be a dog wrapped in cat fur.

Still...Buddah does not talk to me the way Max does; Max carries on long conversations, which are usually complaints about the lack of food on demand, and why am I not providing a lap right this second when he wants one. Buddah is usually off in his own little world; it's a nice place and he's happy there, but it makes him a quiet kitty for the most part.

This morning when I headed into the kitchen to feed them both, Buddah thundered down the stairs, sounding more like 100 pound Hank than 13 pound Buddah. He jumped onto the counter--yes, I feed him up there, just to keep the cats separated--and he butted my hand with his head, impatient for me to open that can of wonderful Stinky Goodness. His tail twittered and he pranced until I plopped all 3 ounces of something that looked as if it had been eaten and regurigtated two or three times already onto his plate.

It was fishy; he loves fishy.

I gave Max his food on the floor (ok, on a plate on the floor, just so you know I'm not that horrible...) and he dove in with as much gusto as Buddah had just seconds before. The kitchen was filled with the sounds of "mmpf, slurp, gobble, snork" and I turned away to get my own breakfast.

The sounds of Stinky Goodness being devoured suddenly cut in half, and I turned around just in time to grab Buddah from jumping down right on top of Max.

I put him back on the coutner and told him in no uncertain terms "This is your food. Let Max eat his own."

Buddah peered over the counter at Max's different-brand-because-he's fat-fishy bounty.

Max looked up at me like Oh cripes...put him down here and I'll share. Just give me a couple bites of his stuff.

Let Buddah jump down, and he had perhaps two bites of Max's food. He wandered off, seemingly happy, to my admonition that I was throwing the food away. No more until tonight.

Two hours later I was sitting at me desk and felt a thin kitty body rubbing against my leg. I looked down, expecting there to be a tiny gray toy mouse for me to throw, but instead Buddah was alone, and he looked up and let out a tiny Meow, meow.

"I know you're hungry. You should have eaten earlier."

"Didn't I say no more until dinner?"

"It's not fair to Max...if he hears me put out crunchy food he'll want some."

We could not let the week go by without acknowledging the Spouse Thingy and his dedication to his work.

So we took him out to dinner tonight.

And we let him pay.

I think they're watching birds in the side yard.

I'm not positive; I didn't want to get any closer, lest we disturb the non-fighting kitties...

They've been pretty good with each other lately; Max has stopped growling, finally (at us as well as Buddah), and he actually initiates play once in a while. I expected some increased snarkiness on his part lately, because we've pushed back their meal times, and Max's #1 priority in life is food when food seems like a good idea, even if it's at 5 a.m.

He adapted pretty easily to not getting fed until 10 a.m., which means I'm not getting cat-slapped when it's still dark outside. Well, not in demands that I get up and feed him. He still likes to body slam all 16-17 pounds of himself onto my face when I'm asleep, just because he can. And I frequently wake to him sitting on the bed by my pillow, staring at me.

Most disturbing, though, is when I wake to him petting me. He curls up next to my head, reaches that little paw out, and pets my face. I haven't figured out if he means "I love you" or "You know, I could shred the skin off your cheeks before you could do anything about it..."

But...today he's being good. He's letting Buddah look out the window with him. It's quiet. 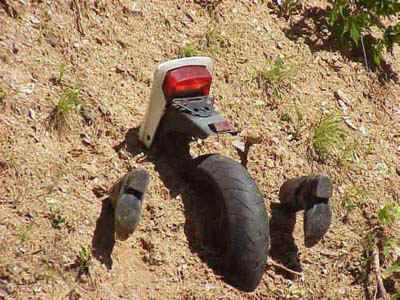 This has distracted me enough this week that I've had blog-block.

Well, that and finishing the Dark Tower Series. Holy bajoobers, that was an incredible piece of work.

But the book with the cute kitty on the front cover... (that would be Bones the Cat) ...the kitties of the blogosphere got together and created an anthology of sorts, poems and stories and essay, in order to raise money to help kitties in need.

After some initial headaches, the book is now at the printer and is about to launch.

You know the new cat food, the one that's supposed to be very good and healthy and wonderful for your kitties, isn't going to go over well when you open the can and the cat sitting on the counter backs up and nearly falls off, the cat on the floor stares at his plate and meows woefully, and someone comes from the other side of the house to ask "What is that smell???"

You know you spend too much time with the kitties when you blow you nose and wind up with a lot of cat hair on the Kleenex...

Conundrun for today: clean the kitchen, clear out the shed, clean the litter boxes, etc. ad nauseum, or finish reading Wolves of the Calla...

Because the week just flew right by me and I have nothing to say, here's a picture of someone else's kitty, who seems to feel like I do that the week is already over.

This thing looks real when you first wake up and don't have your glasses on:

For Christmas, my mom sent me this pillow, which speaks the truth:

However, we had nothing upon which the pillow looked spiffy.
And it's all about looking spiffy.
So I took the monetary gift my mom also sent, and bought something upon which it can be its spiffy self. 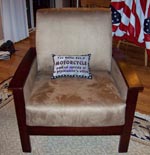 Our family room now has enough seating for the family, and it looks tons better.