First thing this morning--after consulting with the Spouse Thingy about how much Max ate over night (a lot) and how he seemed like he was doing (pretty good for an old man with cancer)--I did like millions of other people did, and turned on the TV, looking for election news. I thought that when the race was called I would feel relief, and I did...but it was bittersweet.

Four years ago still weighs heavy on me, but not for the reasons one might suppose. I cannot get out of my head that four years ago I was a week or so away from a meeting that probably would have changed the trajectory of my career, but on the 11th, that all changed. 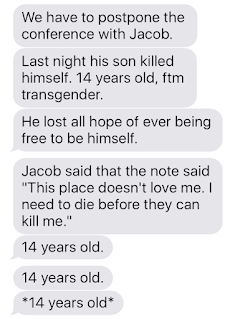 I don't care about the meeting being canceled. I care about why. I care that a young man was so despondent, so filled with fear and disappointment, that he took his own life rather than face living in a country that he was sure didn't love him.

He wasn't alone, I know that.

I think that's why the results of this election have been bittersweet for me. It's not just one young man gone; there are thousands of people dead who otherwise might not be. There are kids, babies, locked in cages who did nothing wrong, whose only crime was, apparently, being born. How many of them have died in custody? And those lives lost, lives that deserved to be treasured instead of lost, are just a fraction of everything that went wrong in the last four years. There's a scar on the US that we might never be able to cover up, much less get rid of. I don't see it healing anytime soon.

When I watched the news this morning, the first thing I thought about was Jacob's young son. If he could have just hung on, how might he feel today? And I know that's unfair; if he could have he would have. What loomed in front of him was too much to bear. But what if?

Embrace coming change; rail against it if it's not what you wanted. But don't forget the people we lost along the way. They mattered. And they are missed.

Oh, how history will judge us for allowing this man and his warped hatred to affect the world.

It is bittersweet. It feels like hate was given free reign over the last 4 years and I don't know how we are going to get over it. Even if we "come together" there is a lot of resentment.