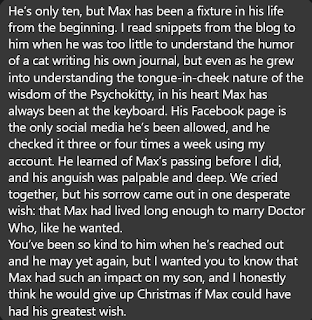 Chad has been a friend of Max since he was two years old, and a font of sticky-person views on life and cats, why cats are the most awesome of every animal out there, and he had quite a bit of advice for Max on how to deal with having a little brother like Buddah.

I know he's not alone in his wish. Max lived with an absolute certainty that one day he would marry the Doctor, and run off in the TARDIS with her. People pulled for him, and wanted invitations to the inevitable nuptials.

Of course Max was going to marry her. Max was Max. He got what he wanted.

The idea that he didn't get that broke Chad's heart, and a few others, I'm sure.

So I'm going to tell you what I told Chad this evening: I'm positive Max did get what he wanted. He just didn't have a chance to tell us about it.

Look, we have to remember, the Doctor is a Time Lord and has all of time and space to play with. She can swoop in, whisk you off on a long adventure, and have you back where you were a minute later with no one else the wiser. There was an evening not too long ago when I walked past his bedroom and saw him curled up on the chair in there, yet a minute later when I went past again, he was gone. He wasn't on the chair, nor the sofa, nor the love seat, and he wasn't on the floor.

Now, I assumed he went to the litter box, but I checked and he wasn't there. There was an odd noise behind me, so I turned back to his room...and there he was, on the sofa, taking a bath.

I didn't think much of it at the time, but he did seem awfully content for a cat who had not gotten the flavor of stinky goodness he wanted at dinner. He seemed happy. He stopped licking long enough to glance up at me, and when I asked him where he'd disappeared to, he answered by returning his attention to he nether regions.

He was not in the room when I looked; there was no where else he could have gone without me seeing. So where was he?

Deep in my heart I know.

I bet you know, too.

Max was special. We think you're right, he got his wish!!! We sure miss him.

The Florida Furkids and Mom Sharon

Of course he did. Max was magic.

The TARDIS always takes the Doctor where she needs to go. I'm sure she would be there for Max.