The tumor left me with some issues. Hypothyroidism, which overall is not a big deal. Diabetes Insipidus, which is a big deal but is not diabetes as one normally thinks of. The diabetes you normally think of is Diabetes Mellitus; in simple terms, that can be thought of as sugar diabetes. What I have can be thought of as water diabetes. My brain no long makes the hormone (Vasopressin) that tells the kidneys when to hold onto water and when to let it go. The end result is that without medication, I’m brutally thirsty and pee every 15 minutes. Luckily, the meds work well and I only have breakthrough occasionally.

Something that wasn’t apparent until relatively recently, though, is that I also have issues with reactive hypoglycemia and cortisol. It poked its head up a few years ago, making flying problematic (because I am a horrible flyer, my cortisol goes all OMG YOU’RE GONNA DIE! and my blood sugar chimes in with HERE LET ME HELP YOU DIE FASTER!) It’s become much more apparent in the last few years, as my levels of activity have increased, and been seriously noticeable lately, as I’ve started swimming for over an hour 4-5 days a week.

I exert, and my blood sugar sometimes just crashes. It doesn't happen every time, though, and that’s the conundrum.

I had my annual appointment with my endocrinologist today, and she’s trying to pinpoint what my core issue is. It could be related to lack of growth hormone—I was on it until a few years ago, when we stopped it because there’s such a strong family history of cancer and I’m edging closer to that age—or it could be related to cortisol levels post-exercise. It could be I’m just a very odd person who periodically bottoms out on the blood sugar, and certain diet tweaks will help.

It’s something that has to be figured out.

Because it has to be figured out, it’s probably not the greatest idea in the world for me to face something that causes me definite problems—flying—with something that likely causes problems—60 miles of walking. 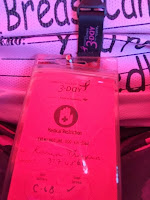 I got sick during a 3 Day in San Francisco. I got sick during the San Diego walk last year. In both cases, it’s more than likely that I was not actually ill (SD med-tent doc thought it might be a virus, but now that seems less likely) but having trouble managing my electrolytes while battling blood sugar issues (at the least) along with potential cortisol issues.

To that end…I won’t be going to Philadelphia and participating in the 3 Day this year, after all. If it were a local event, I could go and walk just a part of it, but adding in the traveling and how beat up my body would be coming home, it was determined that going is just not in my best interests.
If we get this thing nailed down, I can probably walk next year.

There’s more testing to be done, specifically a post-exercise blood test, and then tweaking of pre-exercise diet and ongoing testing of blood sugar, but she did say to keep on with the swimming, racquetball, bike riding, and walking. My other blood work was “beautiful” and I’m apparently tolerating exercise well, but I do need to change a few things to lower my risks of post-exertion harm (like passing out in the pool, locker room, or behind the wheel of my car after) but I don’t have to stop.

I admit, I am a bit crushed by not being able to go to Philly, but I have to look at the bigger picture. By taking this year to get my crap together, I may be able to walk next year.

The bright side for you? I won’t be hard core fundraising. There might be a couple of fun things coming, but I’ll donate anything from those to members of my team.

I much prefer to have you on this planet. If going to Philly just might (and I emphasis "might") jeopardize you remaining here, I am all for you staying where you are and following doctor's orders.
But I gotta say, it sounds like a royal pain in the ***.
I am sending the best mojo I know how to send.

I wonder if that's why you crashed so hard after you pushed yourself last (?) week swimming? You said you felt great after, until you got to the locker room, and then almost couldn't stand up to get home. I hope your doctor can figure out what is happening and find a way to help you.

That most likely was it. Overdoing it plus glucose crash. I'm adding some extra protein to my pre-workout food and will drink a mix of regular Powerade with Powerade Zero for energy during the swims...we'll see how that goes.

And yeah, it's a pain, but it seems like it's a pain we can resolve. I just have incentive now, so I can walk next year.

Yeah, no need to wreak your body and brain on doing something that makes your body go into a tail spin.

Faithful "lurker" Susan says - As much as I loved the idea of you being on this side of the country for a while, I agree 100% with gael mueller: I'd much rather you didn't get sick!