Okay. So last week, for whatever reason, I'm not really sure what it was, I decided to try to use my Fitbit to track my kicks while I swim. I shoved it into a baggy, secured it to my ankle, and gave a it a whirl.

I really didn't have anything to lose; I use my Garmin Vivoactive for the most part now, and I knew it was a risk, but hey...I used a baggy, it was safe.

I sealed it shut tight, used athletic wrap to secure it to my ankle, and hit the pool.

Not sure how long I was in the pool then, but it worked. The picture I have shows 2000ish on the Fitbit but I don't remember what it started with or how far I swam.

So Thursday I tried it again; I wanted to see how many kicks there are in 3000 meters, but thunder forced me out of the pool at 1250m. 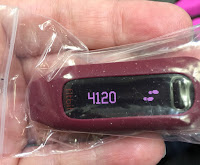 I was disappointed, but it tracked my kicks.

So yesterday I went back, repeated the whole thing, and knocked out 3000 meters. After I finished, showered, and got dressed, I checked the Fitbit, and it was at 8300+ so I figure with steps taken before getting into the pool and then after, I kicked around 7500 times.

Not as many as I thought it might be, but I still got a weird little thrill out of counting them. I shoved it into my pocket, and went about my day, figuring it would register 10K soon.

I got home, fished it from my pocket, and it was dead.

I whined on FB, where it was suggested I stick it in rice, and I did just that. Still wasn't particularly worried, because having it was fun but not necessary. The Garmin tracks my swimming and steps just fine. Almost all of my friends are all on Fitbit, but hey...I could still manually input swims there.

Then while I sat here today--the Fitbit is still dead--I got a message from someone I interact with on a writer's forum now and then. My FB posts propagate to Twitter, where they were following along and kinda laughing at me. Nicely. 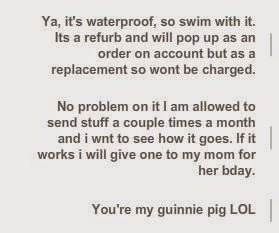 I only know this person as The Swede. I don't even know gender, and they're quite happy to keep it that way.

They also work for a company that sells the toys I like. And because I like, I have ordered from there and my address is on file.

So The Swede decided that playtime must continue, and over-nighted a waterproof Fitbit Flex.

I did start to argue that it was too much, but The Swede made it clear they didn't have to pay for it, it's a job perk, and also, "People send you shit. It's fun."

I also agreed to keep them apprised as to how effective a swim tool it is, and to give some water walking a try.

I can do that.

As soon as I figure out how to affix it to my ankle. The band is a hair too small and I'd like to not use the wrap.

Just read this. Good for you! Yes, you will figure it out. Keep up the good work!