We walked out of the theater today (Captain America! Stay through the credits!) and were surprised to see the sky overcast, looking as if it was going to rain any second, and rain hard.

It was surprising because we're not anywhere near our rainy season, and the forecast was for sunny and warm. And this was the mother of all storm clouds: heavy, thick, and dark...with a very odd sudden cut from dark to bright light.

As we cleared the covered building entry, we saw this: 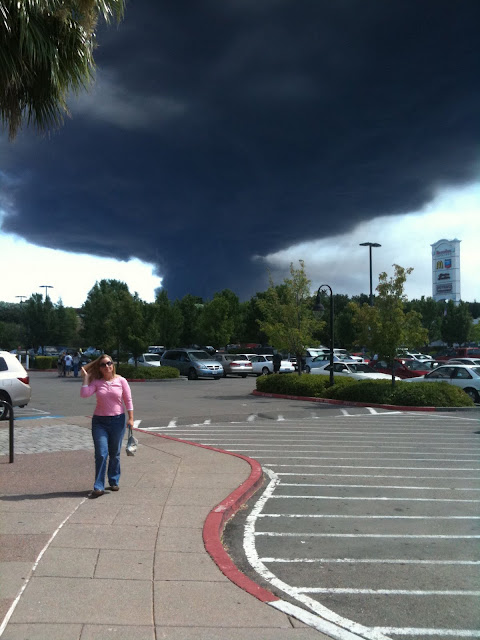 It was a 6 alarm fire at a plastics facility in Fairfield, near Travis AFB. By the time we left the theater it had been burning for a couple of hours and the area around it--which I would guess included the base--had a Shelter in Place order. We could smell it faintly, but by the time we were just a couple miles further away, the smell was stronger.

Once we were home...no smell. But by then the fire was mostly under control and there's a nice breeze dispersing the smoke, and by 5:15 it was pronounced under control.

I was almost wondering if you were going to need to follow that Yellow Brick Road!

I would have wet my pants and cowered in the gutter. And when I wasn't blown away, I would have dug out my gas mask. Hate funky smells like this.

That is a huge amount of smoke. Seeing it in my reader, it did look a lot like a storm cloud until I scrolled down. I hope no one was hurt.

Yep, I thought 'Tornado? Really?' Glad it wasn't, thought that woman walking down the street was either blissfully unaware of a tornado's destruction capability or had some major cajones.

Holy crap! First thing being in the midwest we thought was TORNADO!!!
Then we saw the palm tree and realized where you are. Fabulous pic! But think of the pollution from the plastics!

Yep - we thought tornado too!