Max: I'm hungry. Feed me.
Me: I fed you an hour ago.
Max: Feed me.
Me: There's still food on your plate. Go eat that.
Max: It's empty. Feed me.
Me: Half was left when I was in the kitchen. Eat that.
Max: Get off your asterisk and feed me.
Me, checks his plate, it is indeed licked clean. Feeds him.
Lather, rinse, repeat... Today is a Very Hungry Day, which makes me happy even if it does kinda tie me to the house. He's also not hiding in the closet (so far...I imagine naps will occur there) and he's demanded lap time.
He's only had one not-so-hot day in the last 8-10 days, but even then, he ate well enough. Not great, but well enough. Before all of this started, I wouldn't have blinked twice at a day like that. He's just acting like a normal old man, looks a bit raggedy, but we're no longer half holding our breath. 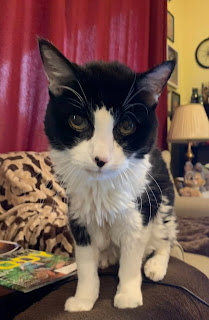 We kept as close an eye on him as possible over the last, what, 6-7 weeks, and have paid attention to as many of the little details as we could. I think we were spot on with medication issues making him nauseated, but as time has grown, we're also pretty sure his main problem was an injury.
I thought at the time he was in pain; just a day and a half before the worst day he's ever had, he tried to jump onto the footrest of my chair, missed, and landed hard. At the time, he walked it off, but by the next day he favored his back left leg and could barely walk in a straight line. By the time we got him to the vet--3 days after finding him passed out with his face in his food dish--he was improved enough that it was just another symptom in a line of symptoms, but he still had trouble walking straight and continued to favor that leg.
Because of some head tremors, the vet thought he might have had a series of small strokes, which certainly would have explained it. And with her, he was a royal pain in the asterisk, which is Perfectly Normal Max. And because he was "feisty" as she put it, getting labs and images would have required sedating him...something neither of us wanted to do to him because of the risks. And nothing would have changed regardless of what those images and labs could have shown. He's reached the point where less stress is the best course of action, and she recognized that putting him through anything might have broken him. Because of his kidneys, there wasn't really anything to give him for pain. And I know how that goes...I miss being able to take Ibuprofen and the like for the same reason. They clear through the kidneys...he's at stage 2 kidney disease, I'm at stage 3. I empathize. If it hurts, we kinda have to just suck it up.
We did get her to change from an oral med to topical, and we lowered his dose. That did wonders for his appetite and nausea, but something was still off. He was hiding, grumpy, only moving when necessary. And then the light bulb went off...yes, I'd suspected an injury but not an INJURY. I started thinking he'd possibly broken that leg when he fell.
I've broken enough bones to know how it can feel. Hurts when you do it, but the pain doesn't really come roaring at you for a day or so. And then you settle with it, but it's exhausting and hurts more when you move, so you move as little as possible. You don't want to be bothered; you just want to stay still, snooze, and if you're lucky, someone brings food to you.
And right at the 4 week mark, when a bone would have healed well enough, he began moving a lot more. He gets onto the sofas in his bedroom more and doesn't just sleep on the floor. He doesn't wait for food to be brought to him, but comes out and asks for it. He's not lying exclusively on his right side, but curling up. He's grooming again.
I may be way off the mark. But I don't think so.
He's still an old man with kidney and thyroid disease. He's going to have off days for the rest of his life. But I think we can ease up on OMG MAX because he's all right. I will still stand in the doorway and watch for the gentle rise and fall that tells me he's breathing, and the Spouse Thingy will still annoy him by listening to his heart several times a week because that tells us a lot of his thyroid and how the meds are working, but...my level of stress has greatly improved.
I get that he could still suddenly die; he's old. But I'm not consumed by the worry of it, and until last week, I was. 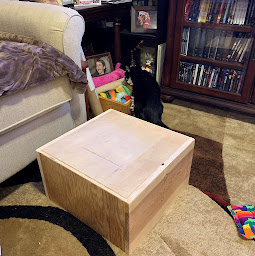 There are now a lot of boxes around the house he can use as steps, and dedicated pet-steps that he ignores but has available, so he doesn't have to jump anymore unless he wants to. He quickly figured out the wood boxes the Spouse Thingy made and doesn't even try to jump up to the sofa now. We took a bunch of extra padding out of his living room cubby to make getting into it easier and have a appropriately sized box he can use as a step to get into it if it looks like he'll need it.
By the time we put boxes of varying heights all over the house to accommodate him, this place is going to look even worse than it usually does, but...that's fine. It's not like y'all were coming over anyway. ;)
Posted by Thumper at 9/03/2020 12:19:00 PM

I'm glad Max is doing better. I'm glad the worry is less. I know he has to go some time, but I'll really miss his grumpy asterisk when it happens. He'll leave a really big cat shaped hole in the world. I will enjoy him from afar with you in the meantime. Reminds me to take extra time with my own kitties from time to time.

You and the Spouse Thingy are excellent cat parents. Thank you for all the loving care you give to Max. Oh, and I guess to Buddah Pest, too. 😽

So glad he is doing better. I think I said this before but I have known Max longer that any of my current kitties and will miss him so much when he has to go.

The Florida Furkids and Mom Sharon

I went through the same thing with my diabetic for a baby who also had liver and kidney issues. I would do it all again if I had the opportunity. So glad to hear that Max is doing better. Glad to hear that your stress level has lowered. It’s an emotional roller coaster ride we cat lovers are on but is a ride we choose to stay on because we love them so.

So glad he is doing better.

I'm glad he's feeling better and so are you. All of this has made mom cuddle me more and I'm starting to feel a little more spoiled. Because I am the last she treats me like a king.
M'Gee

Thank you so much for the update. I have been there, lived in kidney failure for 3years till I got a transplant and 2 of our kitties had it when I did. We did a lot of subcutaneous fluid with them. Doods, I am really, really happy for you all. And be sure and get some real live fresh cooked steak and shrimp 😁

I've kept reading and re-reading this post, not sure of what to say. But I have to say something eventually.

Max means a lot to me and I've never met him. You know that he is why *I* started a cat blog. I see him growing older, and I know about cats jumping and missing by now.

I hope he has more time with you. I have a 40 year old bottle of Port that has been sitting here quietly in the bottom of a shelf. And I keep a jar of Gerber's Chicken next to it (replaced before expiration).

When the sad day comes that Max goes over The Bridge, I will open the bottle of Port and give the Gerbers to The Mews. In respect...

And I am in no hurry to open the bottle of Port...