Major, major thanks to y'all for your support. 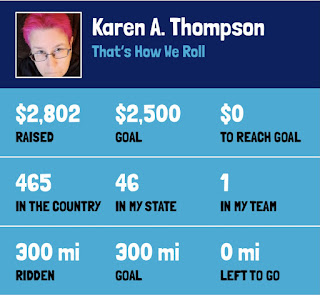 I did 30 miles yesterday; 25 in the morning (5 miles, stop, 5 miles stop, 5 miles...I stopped 5 miles to early LOL) and yesterday afternoon picked up this pretty little bike, and did the last 5 on it. 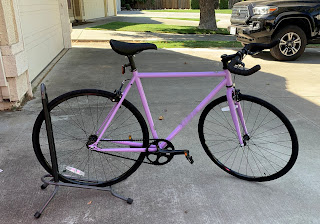 It's a single speed with a flip flop hub, so I can give riding a fixed gear bike a try later. Now, I didn't get the itch for something new again (well, I always have that itch) but I'm about to put a few hundred miles on it in order to review it. Hence, the brand name is obscured, and if you can figure it out, please don't comment on it.

Those 5 miles were fun. This is the first time riding a single speed since I was 12 or so, and the first time I've ridden with bullhorn bars. I think I'm going to really like both. Well, until I encounter a hill, whereupon I might be walking that sucker up since I don't really have the legs to climb.

Next up...150 miles to benefit the American Cancer Society in their Breaking Away for Breast Cancer ride.

After doing 300 in September, I am far less concerned with getting these miles in, so I might do them on the new single speed for a bit more of a challenge.

At some point I'll get back to work...but after getting Max's last 2 books out, I kinda want a break. And I might as well take that break on a bike.

The only downer right now is that the smoke has returned and I can't ride outside today. And tomorrow is supposed to be stupid hot. So, hopefully, Monday.