For the most part, isolation, quarantine, stay-at-home, whatever you want to call it, has not been a huge issue for me. This is when being an introvert has its perks; the only real difference in my life is not being able to ride to Starbucks and sit there for a while, and we don't just go out and wander around stores for no reason other than to get out of the house.

But...I've realized over the last few days that I have been clenching my jaw tight for a month or more. So clearly, there's some stress being felt. Also clearly, I use the passive voice when writing a bit too often...

If it doesn't let up, I'm gonna break a tooth. 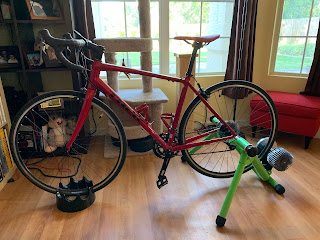 Since I brought my road bike into the house to use on the trainer, I figure this was a good time to give clipless pedals and shoes a try (and not whine too much about the fact that you actually clip in to a clipless pedal, but no one consulted me when they were coming up with a name for it...) On the trainer is the only way I would ever give it a whirl--people tend to fall when learning how to ride with them on the road. I have no desire to list to one side, utter expletives, and then fall over.

But...I still want to try them. So I bought a pair of SPD pedals along with the appropriate shoes, and today I decided to swap the old pedals out for the new.

I cannot budge the old pedals. I'm not nearly strong enough to move the damned thing. Ten years ago, no problem. At nearly 59...problem. And there's a part of me that hopes the Spouse Thingy can't get them off, either. At least then it will owed to the initial installation of the pedals and not because I am that pathetically weak now.

Book two in the Wick shorts series is nearing completion. And it might wind up being longer than the first; a couple stories I thought would be super short decided they would be kinda long, including one that doesn't really go anywhere but still felt worth writing. The cover art had already been planned out, but then the Battleax Editor read one of the new stories and declared it wrong for the book, and also yelled at me for making her cry.

She also grumbled about not being able to make heads nor tales out of an important point in the anchor story, and took umbrage when I offered to use smaller words for her. But mostly, she's mad for making her cry.

I have a doctor's appointment on the 8th, and got online to double check what time. Why the hell would a not-morning person like me make an appointment for anything at 8 am? I had to have been high when I made that appointment...while at the doctor's office...one year ago. At least I'll be appropriately grumpy when she mentions that I have not lost any weight this year, and I'll shoot back, "bitch, you are a tiny, tiny person, and I can break you in half."

(Okay, no I won't. Because she is a nice doctor. And probably won't give a flying fork about having not dropped any weight. She'll be like, "You are not a number on a scale" while I'm "BUT DAMN I EAT 1200-1400 CALORIES A DAY AND I RIDE MY BIKE A LOT AND LADY I AM HUNGRY!!!")

((I am totally eating an entire cake after this appointment.))

One thing humans are good at doing is adapting.

I decide on dinner by looking the fridge and seeing what I have. If I have a cooked chicken thigh, I cut the meat off and stir fry it with mushrooms and onions. Or cook a couple veggie sides and just eat the thigh by hand.

Some meals are mostly the same but deconstructed. Having separate bowls of a chicken thigh, carmelized onions, and mushrooms are te same inside me as a stirfry, but they taste different individually if you add different sauce or spice.