Ok, I've now had the chance to put about 40 miles on the new bike. It's still a bit breezy out but unless I'm heading right into it, not too bad. It took a few miles and getting off and back on to get the seat angle and height right where I wanted, but now that it's dialed in...not too shabby.

It rides quite a bit like my road bike, which is a good thing. I wanted that same feeling but with a flat bar, which gives me a fair shot at figuring out which one I like the most. And while it's way too soon to tell, right now, it's pretty well tied up. Basically, I like the both a little too much to be a natural thing.

The fitness bike is a little slower, though part of that right now is trying to ride with the wind pushing at me--and I can feel it. But even when riding where I'm blocked from the wind, I can feel how much the change in position (which is surprisingly not that much) puts me into a but more resistance.

And oddly, my hands hurt more on this, but that might just be a matter of getting used to it. The grips are ergonomic and cushioned, but my hands don't get to move around as much (though I did switch up and use the inner part of the handlebar for a while today, gave me a little relief.)

What I haven't done is swapped back and forth between the two bikes yet, and I won't for about a week. I want to give this one a good breaking in...and also want to change the saddle on the road bike. 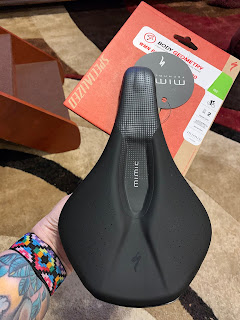 I've had a Specialized Power Pro with Mimic on it, and at first it felt all right, but over the miles I started having some serious pain right where my left sit bone hit the seat. This wasn't even a get-used-to-the-seat thing; this was agonizing and left me literally bruised. I spent a few minutes describing the pain to someone who knows a thing or two and who works for the company, and he thought I had a saddle too narrow for the distance between my sit bones.

Now, I was sitting there groaning internally because it's not a cheap saddle. And I wasn't about to pony up for a new one. But because he's the one who hooked me up in the first place, he arranged to have the next size sent, and when it gets here I can send the other one back.

If that doesn't work...well, the one on my fitness bike is (seemingly) comfy so I can order one of those.

In any case, I'm digging the new ride and am now pouting because tomorrow it's supposed to rain. Hard. With a lot of wind. I could ride in the rain, but I don't want to on a new bike and besides...I'm delicate. Tomorrow's miles will be done inside while I catch up on The Crown...which I am WAY behind on.

Priorities. I has them.