It should come as no surprise to anyone that I own these as a pair of shorts. Until 2 days ago, I hadn't realized that they were available as pants.

By Monday night, they will be mine. I was not passing up the chance to order these and have them in time for the 3 Day. They're gold pants so they're lightweight and should be comfortable enough even if it gets a little warm in San Diego while we're walking, and I'll sure as heck appreciate having them in the morning when it's What-the-Fork chilly degrees outside.

Now, hot pink would pair well with these pants, but everyone is going to be in pink and I can't be like everyone. Last time I wore neon orange and it worked well; any time the Spouse Thingy and I got separated (like, at lunch or pit stops) it was super easy for him to find me. He won't be there this time, but Michelle will be in a sweep van and keeping an eye out for me, so something blinding would be good. 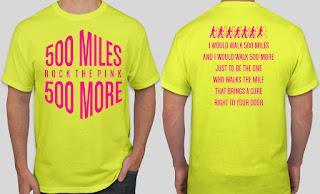 Not, like, to blind her, but to make it easier to pick me out of the masses at a distance.

So, why not screaming neon yellow?

I ordered a couple of these from Custom Ink last night, with a guarantee to get them way before the walk. Today I got a couple of emails from the company, one to confirm my order, another with a proof, and a third with a request.

Basically... "Yeah, hi, we noticed that the shirt you created and ordered seems to be for a charity event. Please reply with a link to your fundraising page so that we can make a donation."

I figured the offer was cool and didn't expect anything more than $5. But within an hour, they'd replied back that a donation had been made, and apologozed that it wasn't more.

Now, I get it. This is good PR and built into the prices they charge. But I would have ordered the shirts anyway because I want them for them walk, and this was totally unexpected.

Twenty bucks is twenty bucks, and now puts me at just under $300 to go.

I'm getting excited now, because that's totally within reach.

This popped up on Facebook memories a couple weeks ago, and I lamented (tongue in cheek) that I had actually traveled across the country wearing it.

I had a notion--before finding the rainbow pants--that I could at least wear the pants again. It would amuse me, if no one else.

So I went digging for them, because it's not the kind of thing I would throw out or donate. It took awhile, because I've store a bunch of stuff and things are not exactly orderly in my closet right now, but I found them at the bottom of a stack of event t-shirts.

And I tried them on. 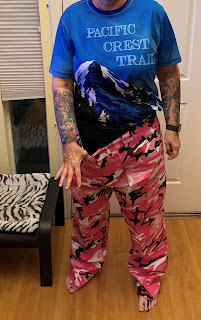 There's a wee bit of room there now. 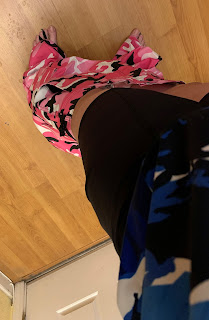 If I let go, they wind up around my ankles.

So they're not going with me, and I think I'm keeping them around just as a reminder of where I've been and where I don't want to go again.

This was good for my ego, I admit it. I've been in Plateau Hell, having not lost any weight since March and only 4 pounds since January, and it's been doing a mental number on me. I can't really cut my calories any further--I'm at 1200, 1300 tops every day--and I just don't have the time to burn more (15-20 miles a day 3-4 times a week is enough, though I'm adding swimming back to the mix next week.) It felt damn good to put them on and have them not fit so badly that even a belt isn't going to help.

I think I'll like the golf pants even more.

Just under 4 weeks to go.

I love the pants, Karen! I stopped by to leave you this important announcement.

Dear Peace Blogger,
We invite you to Blog4Peace on November 4, 2019. Your peace globes and powerful words have inspired people all over the world. Go to blog4peace.com to get a peace globe template or find us on Facebook. We hope to see you again on this incredible day in the blogosphere. Please share and invite others!

Peace to you and yours,
Mimi Lenox, Founder Blog4Peace