I have joined--and left--dozens of writers' groups on Facebook. There tends to be very little discussion of writing on these groups; there tends to be quite a bit of "tell me what happens next in my story" or "name my MC" and my favorite, "I want 2b a writer n I gots a millyon ideas but no one'll by my storys."

I wish I were kidding.

I leave a group when it seems like 99% of the posts are requests for other people to, functionally, do someone else's work, or when it feels like no one in the group truly wants to write--they just want to call themselves a writer. I leave when the same question is asked 50 times a week without the admins doing anything. I can easily overlook issues with language differences or when someone asks a question easily answered by 5 seconds with Google; it's not fair to judge someone struggling with getting their point across in an unfamiliar language, and not everyone has the same level of search skills.

The few groups I've stuck with have many of the same issues, but there are more people participating who genuinely want to write, and who have stories stuck inside that are screaming to get out.

A common question across the board: how do I even get started? I've had this idea for years but every time I try to write it, nothing makes it to paper. I can't get the beginning out. I can't find the inspiration.

They show up and do the work.

I can't get the beginning out. I have the story in my head, but not how to start it.

It's that easy, and that hard.

However you begin your vomit draft, even carrying over to the first draft, it's not likely to wind up being the beginning of your story in the final draft. That's what the vomit draft is for--pouring out the story with all its awful mistakes, and letting it take form. Some writers don't have a vomit draft; they work from a carefully crafted outline and have the story on paper and jump to the official first draft. Others write by the seat of their pants and have one draft that they tweak. There's no right or wrong way to approach your work.

But all writers proof and edit and rewrite, and things change. Including the first lines.

I start with a vomit draft; it's a royal mess of convoluted thoughts and sentences that would make my fifth grade teacher cry. I know the story; I know what I want it to say. But the vision in my head often starts with very simple things, a relaxed and basic structure only intended to get rolling. By the last draft, I'll have changed 80% of each sentence in the manuscript, at the very least. 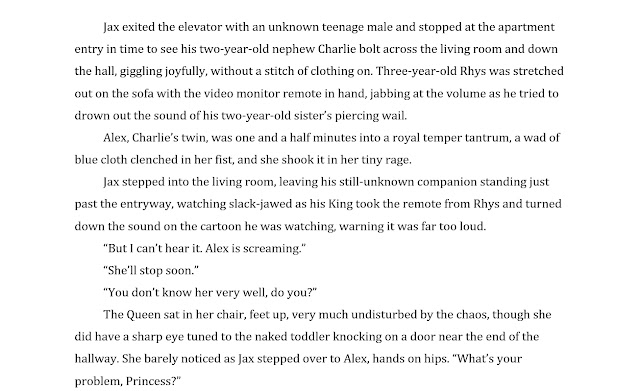 This is the version that went to my editor...yet this is not how the final draft begins. This is now the start of chapter two.

When I sat down to start this book, The King of Saint Francis, I had no idea how I wanted to describe the chaos the King walked into. I needed a starting point, so I sat down and started writing, knowing that it might not make it to the final draft. I didn't worry about grammar, style, narrative, or anything other than starting.

I did not wait for inspiration.

There is nothing wrong with writing something so horrible that you won't even read it out loud to your cat. That's what the vomit and/or first draft is for. Just sit down and do the work. Write the words, even if those aren't the words you want to use. Write even if you're not clear on where the story will go; chances are it will tell you. Cough up 100 pages if you have to, but you'll find your beginning somewhere in it.

And to that...there is no writer's block. Write your way through it, and cut the crap out of your manuscript during revisions.

Give yourself permission to suck.

Little did she know...

You are my hero. I feel much better. Sorry this is so short. I have to go back to writing something awful! Many, many thanks to you for your time, your comments and your heart. Yup, you are my hero!

And you will find that the more you write the better the initial draft gets because you start learning and it becomes easier, like knitting or anything else that takes practice. Dean often says that writing is the only thing that people don't believe takes any practice.

But, as many writers say, you'll never get there without butt in chair... (unless you have a standing desk but the metaphor remains.)