Thanks to your generosity, my head is now cold--no kidding, it's freaking chilly--and St. Baldrick's has $1504 that they otherwise wouldn't have had. Even better...DeVere's, the Irish pub where the event is held, has raised $2.5 million in the last ten years. I don't think that includes this year, either. 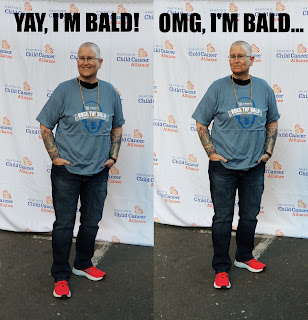 Not gonna lie, and I've said it before, I really don't like this. The next two weeks are going to be several levels of uncomfortable; people stare more at the bald than they do when my hair is neon pink, probably because they're trying to figure out if I'm sick, if I'm just weird, or what.

Truthfully, it would be super easy to sign up, raise funds, get my t-shirt, and then duck out without getting my head shaved, but that wasn't the deal (other than 2015 or 2016 when a last minute don't-shave donation of $3500 was offered and I couldn't pass it up...)

Every year I tell myself this is it, after this I'll just donate a few bucks, but I'm not telling myself that this year. This was year 6, and next year I'll move up from the Squire of Hope rank to being a Knight...and guys, I am all about the fake designations. I WILL BE A KNIGHT!

After that...well, the next one is at 10 years, and I told myself before that I didn't need it, ten years was stretching it. But then I thought I would keep doing it until the year I turn 60, and if I do that I might as well do another year...

But even though I don't have kids in my life going through the horror of diagnoses and treatment, this means as much to me as the events for breast cancer. Mostly because it's kids involved, and the idea that any child has to go through this is so wrong.

Both of my parents had cancer. My dad lost a kidney to it, and my mom had lymphoma. I could (and have) done things to raise money to combat those diseases, but I think they would be just as pleased that this is what I do in their memories. My dad was a very stoic, quiet man, not prone to emotional outbursts, but I know that the idea of a child with cancer would have reddened his eyes and make his voice crack...and then he would excuse himself to another room so that no one else would see what he was feeling.

So, next year for sure, so I can become a Knight, and then y'all will have to address me as Sir Thumper.

Ps: Are you losing weight?

I will gladly call you Sir Thumper. I have watched your posts about all the walks and stuff and wish I could participate. I have mobility problems so I donate the little bit I can spare from my AS and vicariously enjoy the walks. Keep up the good work. I'm proud of you.

Sir Thumper - we salute you!!!

Honestly - we are very proud of you and know your parents would be too. Cancer sucks. Kids having cancer sucks very loud.

The female equivalent of a knight(sir) is to be called a Dame. Dame Thumper, and there is nothing like a Dame!