If you follow me on Facebook, you may recall that 10 days ago I was pondering the possible location of a manuscript I wrote 35 years ago. I knew I’d seen it at some point in the last couple of years, but couldn’t remember exactly where. When I wrote it, there were no personal computers or word processors; it was done on an old typewriter—not even electric—and the only copy of it existed on yellowing paper in fading ink.

I don’t know why I never typed it into Word and saved it as a digital file. I just didn’t. But I tend to keep everything I write, so I knew it was somewhere around here. I planned on digging through every box in the garage, every closet, and then a second time if needed…but then I ate something that did not agree with me, and I lost 5 days of searching.

But the night before last I was in the spare room—which is basically a closet, the walls lined with tall IKEA wardrobes—and spotted a plastic crate on top of one of the wardrobes that looked as if it might have old papers in it. Yesterday, since I felt better, I dragged a ladder inside, pulled the crate down, and then the sky opened up, pouring down sunshine and rainbows and puffy pink clouds made of candy.

It was there, buried under an assortment of old paperback books, and another, more recent manuscript. 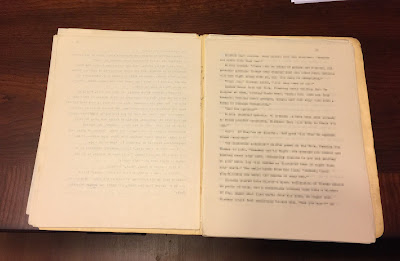 I rushed to announce the discovery on Facebook—hurray!—and then sat down and began to read this decades-old fantasy novel, because surely I can now take that first draft and turn it into something good and worthy of other peoples’ time. I remembered bits and pieces of the storyline, which is why I wanted to find it; the concept was good, and it could be woven into the book I’m currently working on (The Wick Chronicles, Book Three, for those keeping score.)

The opening was a little shaky, but that’s all right. It was redeemable.

Then I kept reading. This serious book, a tale of salvation in the midst of war, made me howl with laughter. The story that has simmered somewhere in my brain since I was a teenager, one that I pounded out on a 30-year-old typewriter while sitting at the kitchen table in our first apartment in Provo, Utah, is so unbelievably bad, so horrifically plotted out, that I couldn’t help myself. Amid several dozen WHAT THE HELL WAS I THINKING moments there was a plethora of snickering at my own ineptitude and clumsy attempts at sounding oh-so-clever.

I’d forgotten so much of the story that reading it—in spite of the horror of how bad it really is—kept me turning the pages to see what happened next. Yes, the narrative sucked and the words I used were clumsy and poorly chosen, but I needed to know. How the hell did I resolve this mess?

It's not a long story; novella length, an easy 2 hour read. So I stayed in my chair with the pages perched on my lap, and read all the way through.

Right up to the point where I realized the last chapter, the final battle and story resolution, is missing.

I have no idea how this mess ended.

My laughter turned to a touch of upset; not because it needs to be finished, but because I really want to know how the hell I took a teenaged boy from his life as a cobbler’s son to defeating an army of highly trained warriors serving at the whimsy of a Dark Wizard…all in under 150 double spaced pages.

The story is there, though. It will serve as threads that I can wind through my work-in-progress, and another ending can be written, but damn…I really want to know how this clusterfrak of a book ended.

I understand. I have an old journal from college. Creative Writing 101. I got got good reviews from the instructor. But as I read it now, I am almost embarassed at the simplicity. The poems were trite, the short stories obvious before the endings, the essays were, well, college-crap. A couple of parts were good.

I got better as I got older. Some short stories published in those "we'll print it and pay you nothing but at least you will have a book to show" deals. I'm thinking of collecting the best of the short stories into a book like those to at least have them all together in one place, and I suspect it would meet those minimal selling points.

But I'm never going to be the writer I once thought I would be.

I have very recently returned to blogging and after reading some of my old posts I had to wonder why anyone would read it. Then I'd run across a few about the things my family has said and done and realized why I wrote it down even if it is done incredibly bad. One day my kids can read it and hopefully remember how bizarre and wonderful our family is and for some reason I need to write it. Most of the time it's on scraps of papers or backs of envelopes but I figured there would come a time I could pull them out again and start putting our story together. I know how it ends. It doesn't so long as they remember the love and laughter these times were and to continue them with their own families.