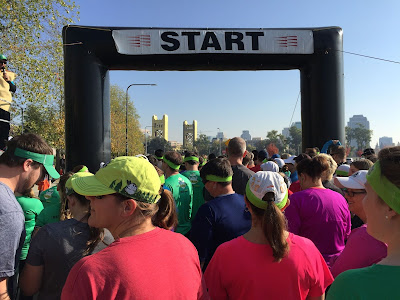 It was a beautiful day; chilly when I left the house but already in the high 50s by the time I was standing here, at the start. And the start gate framed the Tower Bridge nicely; I've driven over that bridge dozens of times, but on this day I was going to get to walk over it, right down the middle, and honestly...that was kind of cool.

Aside from not training for this, I made a couple of mistakes. I couldn't eat beforehand--partly because it was just too early for me to get any food down, partly because I was actually a tiny bit nervous--and I lost my water bottle before we even got started. The water bottle wasn't an issue so much as it was a worry, because there were 4 aid stations along the way where water and Powerade were available. My real issue was that, not having eaten, I forgot to stick a roll of Lifesavers in my waist pack, and just before the 2nd aid station, maybe a quarter mile, I realized I was feeling nauseated and dizzy.

My blood sugar was tanking. Not having candy on me was probably the worst thing I could have done. But, I made it to the station, where there was cake.

A bite sized piece of cake, some Powerade and water, and I felt awesome. My pace was better than I'd hoped--under 16:30--and I took off.

Well, "took off" is relative; I was not speedy even though I was bettering my usual pace, and I was getting passed...a lot. Honestly did not care, as long as I wasn't last. And I don't even know why I cared about not being last.

I slowed down some after mile 3 and started feeling blisters forming around mile 4, but none of that was much of an issue. The route was beautiful, taking us down the river and through part of downtown, including a stretch up Capitol Mall which was an incredible view. If I could have stopped for a picture, I would have, but at that point I knew if I stopped I wouldn't get started again. I slowed down enough to grab another piece of cake (we're talking one-bite sized pieces...I didn't really want it but wasn't chancing another drop in blood sugar) and Powerade, and headed for the final stretch.

My main goal was to finish 10K in under two hours. My typical walking pace has been 20 min/mile, and all I really wanted was to better that. 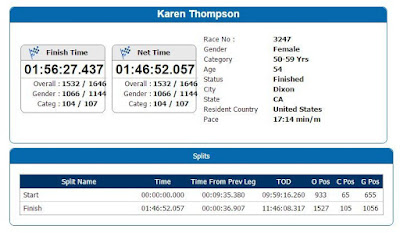 The finish time is from the time the first wave of runners crossed the start line; I was in the 3rd or 4th wave, so started about 10 minutes after that. My chip time, what I finished at, was 1:47 minutes.

I was one of the last hundred fifty people, I think, but I am not unhappy about that. Hell, I'm stoked. It gives me a really good idea of what I need to do to get ready for Tinkerbell, and in spite of how freaking sore I am today, I had a fantastic time. All the swimming was terrific for my cardio; my feet took a beating for lack of training, but I was never winded not felt like my HR was too high.

So. Next goal is a 15K in San Francisco on January 10; it has a pace requirement of 15min/mile and while I'm not counting on being able to do that and thusly not getting the shiny medal at the end, it's another test. If I know I have to *really* train for that, I will.

And who knows? I sure as hell didn't think I'd do any better than 18-19 minutes for the Beat The Blerch.