I Googled "You're not quite normal" and this is what Image Search coughed up: 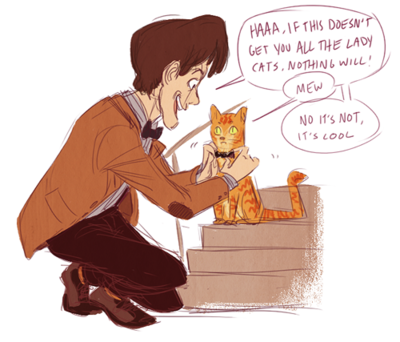 Doctor Who, with a cat.

I looked for a "you're not quite normal" image because of the phone call I just got from the Gastroenterologist who performed my colonoscopy the other day. He took several biopsies in there, paying particular attention to a reddish area that he thought might just be a spot where the colitis had not yet quite resolved.

Before he began on Tuesday, he went over why I was there--because there had been an issue and I wasn't only there because I was over 50 and it was time--and he thought, based on the Cat Scan I'd had in July and the symptoms, that I'd had an infection. He mentioned that my regular doc had diagnosed possible diverticulitis, but if I'd had that (badly enough) it would have shown on the scan, so he wasn't expecting to find giant diverticulae.

Ok, fine. He did the scope, took some biopsies, and then he sent the snippets he took out of my colon to the pathologist.

The results are already in.

I have some "mild architectural changes" and a few small diverticulae, but none of that explains the sudden onset colitis of early July. There was no sign of infection, and other than speculating that I may (or may not) have the start of some chronic inflammatory disease, he doesn't know what's going on.

But...he also doesn't think I need to worry about it, unless things get worse.

So of course, I kinda wanna worry about it.

What I'll really do, though, is focus on the fact that not once did he mention the presence of cancerous or even pre-cancerous cells. And embrace the fact that once again, I have been deemed not quite normal.

At least you are status quo of not quite normal!

Yep, that's a whole lot better than getting a 'C' on your report card.