You think I would have learned by now. If it's a food I have never had before and i did not make it from scratch, I need to read the freaking label. 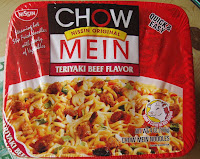 This stuff is pretty tasty. So tasty that we bought a case of it at Costco.

Now, I didn't try the sample, the Spouse Thingy did. He really liked it. And I figured, why the hell not? I like chow mein. It was cheap. We'd eat them all before they expired.

So last night I prepared one for myself after the Spouse Thingy left for work, and halfway through I saw this thing wedged between a few noodles, and thought that was some ugly looking beef.

I picked the ugly looking beef up, and turned it over, and there were these little lines. Lines like one might find on the underside of a mushroom.

I bolted for the box of chow mein packages and looked. And in tiny print: Shitake Mushrooms.

By this point Max was very interested in whatever I was excited about and he followed me as I went back to the table and got the chow mein, followed as I threw it in the trash, and chased after me as I ran down the hall to the bathroom.

I didn't need to stick a finger down my throat; just the idea that I had eaten mushrooms and knowing what that was going to mean over the next few days had my dinner pushing its way back up and out. I had gagging noises coming from deep down, reverberating through my chest, practically waking after me as I ran down the hall.

But when I'd gotten up all I was going to, he stepped back and gave me a disappointed look.

That would have looked so much better on the carpet in the library, especially since you drank Hawaiian Punch with it.

Sorry for my lack of foresight, furball.

The good news is that because what went down came back up in just a few minutes, I was spared the worst of it. I felt awful most of the night, but woke up with both cats piled on top of me. Max was near my head, purring, trying hard to make me feel better. Buddah was draped across my legs, but really only because I was where he had intended on napping, and he doesn't let something like someone already being there get in his way.

Today I've felt kind of meh, but not like I want to die, so I have that going for me.

I have high hopes that I'll feel fine tomorrow. The temps are only supposed to be in the 70s, which will make for nice walking weather, and I have less than a month until the 3 Day in Atlanta.

I'm glad you got most of it out in time to not feel as bad as you have before :/

And tell Max that he should try horking in the toilet instead to make interesting swirly patterns. It might save you some clean up if he buys it xD

It's too bad that you bought a whole case of it. You are allergic to mushrooms, I take it. Poor you.

We hope your husband enjoys eating that case of noodles, as apparently you won't be.

Drink lots of water to flush out your system.

Sorry to hear about your too close encounter with mushrooms. And yeah, the last time I was sick and horking, I had a furry audience too! Panda Bear and Cookie.

What I don't get is how they can hork and then go about their business with no apparent after-effects. When I get sick like that, I feel miserable for days.

Hope you feel all better soon!

OMG! I thought I was the only person who had reactions like this to shrooms. I am very good at reading labels but being vegetarian bordering on vegan, I had to learn all the other words too. The ingredients list keeps getting teenier in fonts on some things so now I carry a mag glass. BTW-some people think beef and chicken broth isn't from animals. How stupid can someone be? Especially the nutritional people who work in the hospitals!

That is too bad. I am allergic to peppers but they cause breathing problems, not tummy problems.

Thanks for the 'heads up' on this and the label reading......dear son's girlfriend has allergies to a couple of things.

Hope you are feeling better!

Oh, dear. I am really glad that you hurled before the really bad symptoms could start. I always get an audience when I do anything in the bathroom, too. I hope that Spouse Thingy really likes the mushroom noodles.

Ivan and Izzy from WMD said...

Well, phooey. I thought you'd found a mouse in that stuff or something.

Ivan and Izzy from WMD said...

Ooops. My mom said I shouldn't make fun of things like this. She says the same thing happens to her if she eats scallops.