Right now, I can literally feel the outline of my bike seat, despite having been off it for about 8 hours. I've knocked out 80 miles in the last 4 days, and while that's peanuts for a lot of cyclists, it's a major chunk of miles for me. I did the math and realized I needed 20 miles a day, every day, for the rest of the month to hit 300...and I feel pretty determined.

More than that, I'm starting to feel like I can do it.

The hardest part of this is the hunger. I want to eat, like, EVERY FREAKING THING IN EXISTENCE EXCEPT FOR FISH BECAUSE FISH IS GROSS, but I'm also trying to not shove half the world down my throat. Normally I'm at 1200 calories a day but I am allowing for a couple hundred more because starving is just not my thing. You'd think I'd drop a pound or two, but no...not a freaking thing.

Remember this, boys and girls. When you get old, the weight does not want to budge. And it moves from your ass to your gut, like migrating little adipose lumps that are not nearly as cute as the adipose on Doctor Who.

Not worrying about it. It is what it is, and at this point in life I think being active is more important. But I sure as hell won't be upset if the riding catches up to the diet and I drop a few.

I may need the distraction of riding over the next few weeks, charity ride or not. we are thundering down on the one year mark of Buddah getting sick, something I am still not okay with. I suspect I will be preoccupied with the what-ifs, and the anger over the idea that he should still be here.

And after that...the slowing of Max's roller coaster ride.

It's not going to break me, but I am going to feel those six weeks, and immersing myself in the miles will probably help. 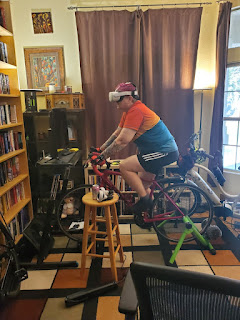 After playing with the Spouse Thingy's VR headset, I took the plunge and bought my own, for no reason other than there's a decent VR cycling program. It's also a non-cycling program, one where you can exercise in different locations around the world.

After I tried it, he convinced me to try Beat Sabers...holy hell, that one is fun. I bought it for my own set, and am almost afraid to poke around and find other things to try because that could get a bit spendy.

The goal now will be to not fall off the bike with the headset on, and not break things around the house by swinging at the things I'm seeing that aren't really there.

We won't discuss the shrieking and swearing the first time I tried riding with it on and the in-game bike went off the road and had a sudden drop. Nope.

I need more fans on me, though.

That chit gets hot.

And finally, to answer a question I've gotten a few times lately: yes, I am still working on the next Wick book. It's going quite slowly without my writing partner, but I'm still writing.

I'm also debating with myself how to publish.  Eventually it will make it into print, but I'm also seriously considering releasing in-progress bits online, chapter by chapter or section by section, but I'm still at a loss as to where to do that. The most obvious platforms--Patreon, Medium, and Substack--aren't necessarily the best venues. But they would be the easiest to use.

I'm not beholden to a specific publisher for this part of the Wick universe now, so it could be anywhere that works for y'all.

I am beholden to a publisher for a book, though. Right now we have a verbal agreement but I will soon sign on the dotted line for Riding My Asterisk Off, which is proposed for a mid-2022 release. The finer details, like what happens if my asterisk doesn't get ridden off, still need to be ironed out, but we'll get there.

I get new toys out of it. That's the important part.

Heads up on VR use:
Several days after Younger Son got his Oculus, he woke up disoriented in the middle of the night feeling so strange he feared he was having a stroke. The next day he did some research and learned this is a common reaction to new and excessive VR activity.

So, be careful, and don't be too alarmed if one night you wake up unsure if you really are awake or having a very lucid dream.

I wonder what Max would say to you, now, seeing how much you still love him.

Isn't it so frustrating to be half starved and still not be able to lose weight?

Good luck with the riding, writing, and publishing.

You are amazing. Don't ever doubt that. The fat is turning to muscle - you're starving because you aren't taking in enough calories. Try 6 meals a day instead of 3. Got to keep the fuel level up so you can do what you want to. Aging gracefully is great but if you don't want to fall apart, or fall over, you have to do what you can.

Losing any loved one is hard on us, human, feline or canine - heck even goldfish, especially as we get older. The fact that you remember and love them is exactly what you should do, and both cats take it as their due. I have certain cats in my memory that I will never, ever forget and I'm still sad that they are gone. They are family. They felt the love we had for them and that's all we can do. Keep on keeping on, Karen.

Awesome work on the bike! You are an inspiration. I wish I could get up to 20 miles on my bike, but there's no flat road around here and I'm too lazy to drive somewhere.

I sympathize with the fat migration, it does seem to have a mind of its own. I try the " I'm gaining muscle" self talk, but I'm pretty sure that muscle doesn't jiggle.

Looking forward to the upcoming books.