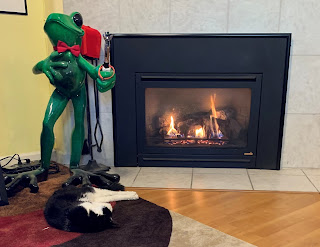 Max is doing pretty well today, and basically has been since last Wednesday. Tuesday was the last really bad day that he had. Between the two meds he's on, he's not nauseated and he has enough of an appetite to make me satisfied. Not super happy because my heart wants him to eat more than is probably physically possible, but well enough.

Hell, I left 3 plates of food in his room last night (usually only 2) and each had 3 ounce of wet food...and the Spouse Thingy reports that he ate nearly all of it. He was given 3 ounces for breakfast and finished it all by 10 am. He's only nibbled since then, but given how much he's had since last night, that doesn't worry me.

I'm out of his favorite gravy food, so I suspect he's holding out. I'll run to the store in a bit.

My riding plan for October was to rack up a minimum 150 for the American Cancer Society's Breaking Away for Breast Cancer virtual, and I looked forward to it because 150 miles in a month is not difficult at all, and the cause is worthy. Heck, I even dyed my hair neon pink the way I would if I'd gone to an in-person event.

But then Real Life smacked us in the face and October has been consumed with sick cats and loss, and until this last weekend I have not felt comfortable leaving Max alone for very long. I managed a short ride on Saturday (would have been longer but I had weird noised coming from my drive train and spent time trying to sort that out) and intended to do 20 yesterday...but the wind hit.

I've got around 40 miles for the month and unless this wind dies down, that might be it. I'll make up the miles, though, doing some longer rides specifically meant to go toward the ACA ride.

The last time I really wrote anything other than blog posts and on Facebook was the last draft of the last Wick shorts book. I took an intentional break, but I didn't think it would be this long, but I'm starting to feel like I'm ready to get back to work. There are copious notes for (what for now is) The Blackshear Academy and with NaNoWriMo coming, I may jump into it.

I think I've done NaNo every year since 2006 or so, usually as a way to info-dump whatever story I've had brewing in my head. Several have made it all the way through the publishing process, a few wound up being strictly for my own amusement and will never see the light of day.

It'll be a while before I decide whether the manuscript I'll begin in earnest on November 1st will come out as mine or Max's. Maybe continue with both. I just have no idea.

I've been on the fence about Halloween: hand out candy, or not? We rarely get more than 4-5 kids as it is and I'm pretty sure the city is discouraging trick-or-treak this year though I don't think it's been outright banned. Initially I thought it was a good excuse to shut the lights off and not do anything. But...

It's not like I'm going to lick any kid coming to my door. I've never touched a kid when handing out candy. Not even close. So I ordered a couple boxes of SweeTarts, movie sized ones, and if we don't get kids, I have candy. I'll wear a mask, I'll be super careful about contact, and what the hell, I'm handing out candy.

It seems lower risk than grocery shopping, and kids have already lost so much this year.

My brain had more but I'm easily distracted and whatever it was...it's gone.

I haven't written in months. The weaving and the new business is a major distraction but mostly it is because my thoughts and stories are rather dystopian at the moment and they just won't go down on paper. I am glad that Max is better and that you and Spouse Thingy are doing the best you can with your grief. Just know that I think of you often and cherish your time with me if only on the internet!!

Mine like BFF Land and Sea, and Friskies Ocean Whitefish with Tuna the most. Lots of gravy in BFF. It gets them some water.