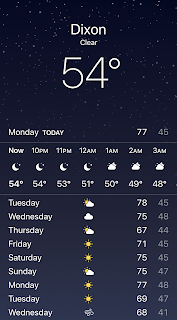 We're finally sliding into both the best and the suckiest time of year.

It's the best because the temps have cooled down and I can go for a ride any time of day without worrying about it being too hot. And this is Northern California--it's not going to get too cold. Worst thing that might happen is rain or super stiff wind, both of which I can deal with.

The suckiest part, tho...it gets dark so freaking early. Sure, a lot of people ride in the dark, but I'm guessing most of those people aren't night blind. I can safely squeak it out to 5:30 right now, but in a few weeks I'll need to be done and home by about 4:30 no matter what I'm doing.

Still going to try to focus on the not-hot part, even though we're a little warmer than typical for this time of year. We went for a 45 minute ride this afternoon, ending it at the pizza place; tomorrow we'll hit the gym. Tomorrow night I'll whine about my noodle-legs, because that's what I do.

Good news is that I have some really good Havarti cheese to go with my whine.

No, really...I'm not a cheese person but we picked this stuff up at Costco and it's amazing. Crunchy, too. I don't think I've ever had cheese with crunchy bits in it, but I like it.

I'll try not to contemplate having had pizza and then more cheese...its probably not a wise move for someone with lactose intolerance.