Basically every year for the last three years, we've decided to sell the motorcycle and scooter. The first time, after a short ride, the Spouse Thingy changed his mind because it was so much fun. In April, when we actually got to the point of posting an ad for the scooter, I changed my mind after an interested buyer realized the little scooter he thought he was going to look at was actually a pretty big scooter. When he passed, I was relieved, and figured that meant I wanted to keep it. 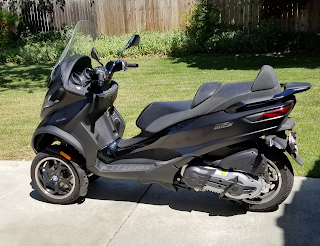 But...since then we've gone on two rides. That's it. I may have gone out a couple times on my own, but I've had this thing for four years and have only put a little over 1200 miles on it.

It's definitely fun to ride. When I'm on it, I have a blast.

The problem is that when I have a choice, I grab a bicycle instead. I'd much rather tool around town on that. And since I'm not a fan of the Interstate, and the back roads around here kinda suck, going on a joyride no longer appeals to me. 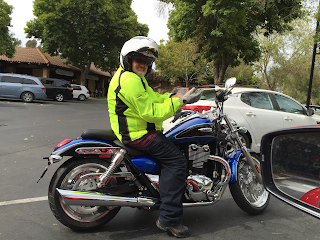 So...this week they're going up for sale again.

The Spouse Thingy is off for 10 days, and with any luck we can get them sold in that time.

Cross your fingers. We have a patio cover to pay for and the funds from these would just about pay for that.

I'm also going to try to sell a couple of my bicycles...and turn around and get another one LOL

No, not the screaming pink beast. That one is my favorite. But the newish gray Marin just isn't working out for me, and the older Raleigh isn't being ridden, so I won't cry if someone buys them. I need to put all the stock items back on (I'm keeping the new seat and post, and the new bars, because I still want to get a beater to learn to work on and those might become part of a future Frankenbike) but this might be a good time to sell a bike.

We're close to UCD and the bike culture there is strong, and with the semester starting soon and all those kids moving in, I should be able to sell them.

Good I want that scooter so bad, but I don't have money. Good luck!