♦ Max and I are coming into the home stretch with his first piece of fiction. He's been like the little angel on one shoulder and the little devil on the other, reminding me that this piece is targeted for young adults so we can't say that, but then taunting me with other inappropriate material because kids today.

♦ I believe he is also upset because I nixed using the word "dood" in favor of its more traditional spelling. Proof of this was the tail thwacked at my face as he lounged on the back of my chair, when I informed him that "dood" is technically not a word. Ok, not proof, you'll just have to take my word for it. But I did get a face-full of Max tail.

♦ Speaking of the furry monster, his late night concertos have turned into a raging bitch-fest held less than 6 inches from my face. It's one thing for him to sit in the hallway, singing; it's a whole other thing for him to be right there, yowling his head off as he tries to get me out of bed. Yes, the answer is to close the door, and I do that once he wakes me up, but there have been nights when he's been genuinely distressed, so I leave it open just in case.

♦ I have high hopes that sooner rather than later he'll learn that being a little bitch at night gets him removed from the room and the door gets closed. I also understand that I am seriously deluded.

♦ This morning the little shit was fed by the Spouse Thingy when he got home from work; an hour later both cats were banging on the bedroom door. I got up, because hey, maybe the Spouse Thingy was late and they hadn't yet eaten, but no...they had. They just wanted me up so that they could have the bed, and they wanted it RIGHT NOW so they could steal my warms. 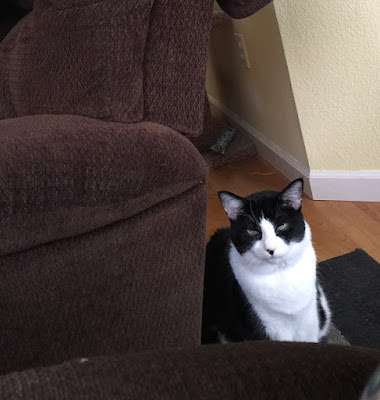 ♦ This is the current look I'm getting from him. It's past snack o'clock, and I am clearly failing him.

Max, give up on the "doods" for the sake of the book. You can use it in yer blog. Seriously, real money is involved, and real money gets ya foods.

Ya may want to stop singing at night. Closed doors are not friendly, and there might be closed basements involved. So ease up, friend...

We had something more profound ta say, but TBT just opened a can of foods, so, well, best of luck.