♦ In just 5 days, someone is going to win a Garmin Vivosmart HR and a Garmin Index Smart Scale. All it takes to be in the running is a donation to either my 3 Day walk fund, or to the Spouse Thingy's fund. Every $5 donated gets you an entry...and it's for all the prizes we have this year, all through the summer.

♦ I keep seeing this posted on Facebook (literally, over 20 times yesterday): 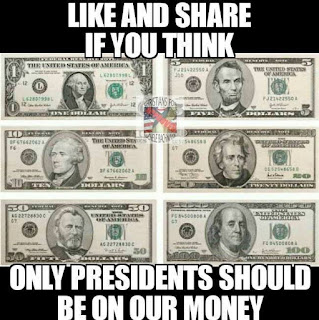 Come on, people. Stop sharing this. If you made it past 6th grade history class, you SHOULD already know that two of those men were never President, and one who is would probably be pissed off that he's on money. If you're aware of this, I can only think that what you really mean is that you only want old white men on your money. Because it's never been just Presidents (and I truly want to see your head explode if Obama makes it on our cash at some point. Hey, he's a President.)

I have to admit, the first couple of times I saw it I thought it was a joke, being passed around with a sense of irony, but then...cripes...there are a whole lot of people who took it seriously and shared it with genuine intent.

♦ I'm getting real tired of 2016 being the year of celebrities dying. Maybe in the grand scheme of things, compared to the thousands who lead quiet lives but die everyday, it seems worthless to be upset over the death of someone I would never have known personally, never have spoken to, and might not have even liked, but... the truth is that the nice, upstanding guy who lives 5 streets over who drops dead from a heart attack probably had no impact on my day to day life; to hear he died would make me a touch sad, and I would send genuine warm wishes for his family, but that's it. A momentary wish for better for his family.

On the other hand, the musician I never met, never would meet, wrote and sang part of the soundtrack to my life. They invoked emotions in me, defined moments for me, and helped me get to know myself just a little bit more. That writer? They drew me into new and different worlds, taught me that the picture doesn't have to be in front of my face but can instead be created inside my head. When that ends, it's like a tiny piece of soul goes with them.

♦ New Doctor Who companion has been announced...and with the excitement of that comes the bummer of the remembering that we don't get the next season until 2017. We get the Christmas special, and that's it. If I croak before then, I'm going to be super pissed.

♦ Next week...we were supposed to be on our way to Disneyland to run in the 10K and half marathon. Instead, we're going to the Monterrey Aquarium, because we had to pull out of the races, owing to the expectation that the Spouse Thingy was going to be off his feet for a month because of some (minor, don't worry) surgery, but the paperwork chase to get all the before-surgery things done, the date was pushed back a month.

♦ Yes, I realize that's a clusterfark of a sentence, but this is stream-of-consciousness blogging today, so I'm leaving it.

So when they suggested taking Hamilton off, I was unhappy. I mean, he practically invented our banking system. But when they said Jackson would go, I was very pleased.

But who to replace him? I thought Susan B Anthony was best, and Betsy Ross very symbolic, but Harriet Tubman isn't going to bother me any. That's history that matters. And I can imagine "the good old boys" in the south saving the old bills for local use... LOL! Well, they'll die off eventually.

I've always thought that Teddy Roosevelt's smiling face had a place on our money too.

Obama? Maybe on a coin in 2108... I like him a lot more than most Presidents, but history will determine whether he is considered worth a money picture.