It’s very nearly October; Thursday is the 1st of the month, a day that my plans at the start of the year would have had me in Philadelphia for a day already, relaxing before the start of the 3 Day. It was to be the kickoff for Breast Cancer Awareness Month in my own personal little sphere, a bubble in which I was going to ignore the naysayers, and just go about the business of doing what very little I can.

Instead, I’ll be home, not walking. But that’s fine. Next year holds a lot of promise, and I fully intend to be where ever my team chooses to walk, ready to go the distance, even if I have to crawl. I just hope the consensus is somewhere fun, and not somewhere hot at sticky.

I was also *this close* to saying to hell with it and walking in San Diego, but…

So I’ll be here, playing online a lot while I cheer my team mates on, and online is where I’ll witness a whole lot of the inevitable backlash to All Things Pink, with particular venom spit directly at Komen.
It’s no secret that I’ve had my own issues with Komen. They’ve made some pretty big errors in the last few years, big enough that I’ve been “done” with them more than once. Stepping back and taking deep breaths, though, has given me the chance to look at the bigger picture, and in that bigger picture they’re doing far more good than not.

But there will still be those people who choose to not see it, who choose to spit out statistics as proof that Komen is evil and proof that the pink ribbon needs to be burned at the stake. The main one I see all the time: Komen only puts 20% of what it raises toward research. 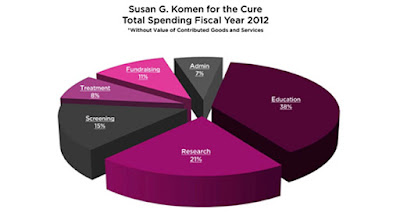 So the statistic isn’t far from the truth, but let’s look at that bigger picture.

In that same year, 15% of funds raised went to screening. The oft-decried Planned Parenthood grants? They go only to screening; women who can’t afford a mammogram can get a voucher from PP, funded by Komen, to get proactive care. That same pool of money is funneled through its affiliates to reach other women and men in need of screening, but who lack the funds or insurance to get it done.

8% went to treatment. The results of that research? Drugs with the potential to become cures, used in clinical trials for people who have run the gammit of the standard treatments. Those have to be paid for somehow; Komen funds many of these.

38% on education. No, in spite of what you read on the Internet, this is not a disease that “everyone knows everything about.” There are always going to be people—either because of age, economic status, level of education—who do not have the facts and instead have a plethora of old wives tales and urban legends as the crumbling foundation of what they know about breast cancer.

11% went to fundraising. You have to spend money to make money, that’s just a simple fact.
One of the biggest complaints I read about and hear about? The bloat at the top, the outrageous salaries being drawn by the CEO and Board.

Yet…only 7% went to administrative costs. That includes all the salaries. The CEO, the VPs, the Board. And when you compare the CEO salary against other major charities, it’s right in line. It’s not as much as the CEO of a major corporation would command, even though the job is on par.

Komen disperses over 80% of its income. The American Cancer Society, which few people seem to have an issue with, is at a rate of less than 61%. On Charity Navigator, they have a 2 star rating. Their top salaries exceed a million dollars…yet few people seem to hone in on them. Komen is rated higher, is transparent about where the money goes, yet they’re the target of inexplicable ire where the supposed statistics tend to be the issue.

I get it; people are tired of pinkwashing. It’s an over-used and misused monetary generator, and far too many companies are going to slap a pink ribbon on their merchandise and claim that it’s for breast cancer, when the truth is that .0001% might actually find its way to a charity.

You’re more aware this time of year than any other.

And yes…donate towards the cause, because money really is the first step.

Pink is not “just a color” anymore, but one day it will be. That’s the goal: beat this sucker down until the only thing pink happens to be is a happy color.

I will never be 100% happy with the things Komen does. But it’s the bigger picture: they do a tremendous amount of good, far more than the hiccups that pop up along the way.

So next year, unless I croak between now and then, I will walk for them. There are too many people who really will die before then, too many who found themselves availing Komen’s programs, and too many who probably thought it was all just “pink shit” and wouldn’t really look at where the money goes. There's not much else I can do; I will never be smart enough to understand the science needed to do the research that will eventually find a cure--that will find the dozens of cures needed, because breast cancer is not simply one cancer.

I walk because I can, because it's doing something when I can do nothing else.

Oh, and the money I raise for those walks? 80% goes to research.

That’s worth a blister or two.

As usual, a thoughtful and engaging point of view. I agree with you, Komen has irritated the heck out of me, but you make a point for using the brain (ack! what did she say?!!) for more than a hat rack.