This is both mine, and not mine. Mostly not mine. Yet...mine. 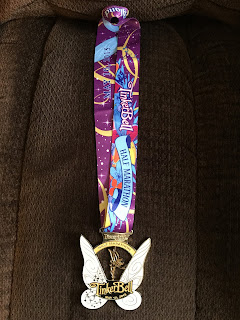 I've walked that distance, sure, but run?

Running is still a hope and a dream.

A few days ago I received a box in the mail; I didn't recognize the name on the return address, and was frankly perplexed why someone would send me a medal they ran their ass off for. Why would someone part with that? Why would someone think I wanted a medal I hadn't earned?

More importantly...who was this person who had my home address?

I poured over my Facebook friends list, names of people in common FB groups. Reddit. Blog comments. Back to Facebook. And I finally found her, with a name slightly different than what she'd written on the box.

I needed to know... Why? Granted, I love shiny things and everyone knows it, but why?

I ran the Tink this year, and when I got to the finish I was finished. I was trying so hard to not throw up all over the place, and I just wanted to find my family and be done. I was soaking wet so when someone put the medal around my neck, I took it off and put it in my waist pack to keep it from getting wet. As I was walking a bit and looking for my kids, feeling still so horrible and wanting to throw up, someone else put another medal around my neck and they were on to someone else before I could say anything.

I tried to hand this one over, saying it wasn't mine, but I was waved off. I intended to find someone to turn it over to, but I had to take care of myself first, and by the time I could, it was too late.

When I read that you want to run the Tinkerbell this year, I knew this had to be yours. And it's not because you run a lot and should have one for that. It's because you don't run yet. That's where I started from. I was a walker and I thought that I could just jump right in to the HM and do it, and it would be so much easier than walking 23 miles in a day. I was so wrong, and my body paid the price.

I want you to have it so that you can put it somewhere and see it every now and then, and remind yourself that the training really does matter. You've said that you are goal-oriented and I hope this is something that motivates you. I have been impressed with the things you're doing this year to help yourself, all the swimming and such. I know it hasn't been easy. And neither is running the half, or even run/walking. But I know you can do it and you will do it better than I did, because you will train for it.

I forgot to put a note in with the medal, but that's why I sent it. The next Tinkerbell medal you have will be yours because you earned it, but I am hoping this will motivate you to keep going.*


I am touched, truly I am, and it will for sure motivate me. And no matter the outcome next May, whether I finish strong, finish with a limp, or get swept, I will treasure it.

But I intend to finish, and I promise...I will train.