I tried to watch the VP candidate debates last night, I really did...but ten-fifteen minutes into it I realized if I had to hear Palin schmooze that folksy "darnit" one more time I was going to put my fist through the TV. Today I will spend a huge chunk of time surfing online for non-video highlights and lowlights so I can find out what happened/what was said/is anyone sucker punched anyone else.

Gah...ya know, as much as I covet that pretty bike, I can't get past the $15000 price tag. For that you could buy a couple of small cruisers. Still...it makes me squeal, or at least the pictures do. I have high hopes it's one of those things that photographs nicely but looks really bad in person.

MK asked in the comments of the previous post Do you have any ideas for a good first bike that's not a Rebel, because it's too small for me.

There's always the Kawasaki Ninja 250; sporty but would give you a little more leg room. Or the Ninja 500. Kaw makes the Virago 250 and I understand it's physically a little bigger than the Rebel, too, and it's a solid bike. There's the Honda Nighthawk...I don't like the drum brakes on it, though.

And soon there will be this: 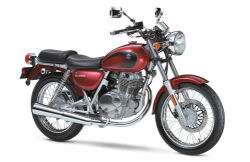 The Suzuki TU 250. It's a standard, has a higher seat height than the Rebel (30" to the Rebel's 26"), and will only run you $3500 (plus freight, assembly, tax, title, license, the fee to use the dealer's pen, cost of breathing air while in the showroom, and a nominal charge for using their bathroom during the 3 hours it takes to buy a bike...) I like its retro kind of styling. Taller riders are going to like not having their knees jamming into the bars.

Really, any cruiser under 800cc, and any sport bike under 600cc should be reasonable to start on. But take the MSF basic rider's class before you buy anything. You'll get to ride a small bike and see if riding is even your thing.
Posted by Thumper at 10/03/2008 11:12:00 AM