I started thinking about a Doctor Who/Calvin & Hobbes mashup tattoo over a year ago (among other things...there are still a couple others I've been thinking about, as well) and I tend toward the ideal that before putting something onto your skin forever, you should sit with the idea for a while. If six months after deciding on a tattoo you still want it, chances are you won't regret it later.

That's not to say you won't regret your choice of artists; I love my first two tattoos but if I could go back, I'd go somewhere else to get them. That's part of the learning process, I suppose; I'd still get the same tattoos, but they'd be better if I'd known what to really look for in an artist's portfolio other than bright colors.

One of the nice things about living in NorCal is a plethora of really talented artists; between San Francisco and Sacramento, you can find top notch artists in just about any style you want. I was fortunate enough to wander into the local shop here a couple of years ago and have Big Greg do my blue hummingbird.

He left the shop here for one in Sacramento, but a Google search helped me find his website, and hence, the shop he's working in now.

About a month ago I took a printout of the concept I had; it was pieces of other images I found online, which made for some decent ink, I thought. If I'd taken it to the local guy, he would have slapped it on my skin as is...and I would have been happy with that.

When I slapped the printout down on the counter, he damn near lost his mind. He's a huge Doctor Who fan, too, and was excited about doing this one. He also has an extremely creative mind and artistic eye, and immediately has some ideas for it.

For starters, what I had didn't look quite like Calvin & Hobbes belonged with the TARDIS. It did look like I'd cut and pasted from other pictures...but he could already see ways to make the image as one solid picture.

I was supposed to get the tattoo 2 weeks ago, but I jinxed myself on Facebook by saying no one better pass cooties onto me...and got sick. So the Spouse Thingy rescheduled for me, and yesterday was New Ink Day.

Before he showed me his drawing, he explained that he couldn't make the TARDIS I'd had work well enough, but he thought I'd like what he came up with.

What he came up with looks a hell of a lot more like an actual C&H cartoon piece; it's iconic, pulls together the cardboard box they're always riding in, Calvin's imagination, and some pretty wicked transmorgification.

Yep, I was happy with it. And he was right. I would have liked the image I came up with, but I loved the one he drew.

Originally I'd expected only to get the outline and shading yesterday, because the original image was big enough and color intensive enough that it would have taken 6+ hours, and I've never sat that long. I was sure my limit was about 3 hours, but once he had the outline done--it took about an hour or so--and then the shading, I wasn't crying Uncle and he didn't have anyone scheduled after me, so on we went.

It *really* helped that he has a TV and DVD player for distraction (I watched Anchorman, Harold & Kumar, South Park movie, and half of the Princess Bride. I need to see the second half) and that he's very outgoing and easy to talk to. And that we like *a lot* of the same things.

In total it took about 5 hours, and the last half hour was very ouchy...I'm not sure how much longer I could have gone. The end result was totally worth it, and firmly puts me into the ink category of People My Mother Was Probably Afraid Of ;) 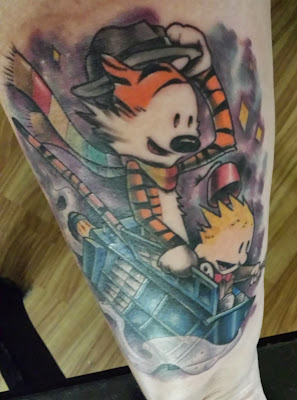 
No, I am not done with tattoos yet. Not even this year. I have 4 in my head (including the ones I've mentioned before) and want to get 2 of those by the end of this year.

No, I don't expect people who are =meh= about tattoos to understand or like or approve. That's all right. I like them and I approve.

But for sure, if you need a killer tattoo and are near Sacramento, go see Big Greg.

It is cool ink. I do not care to have any, but go for it. Get all you want. It is your body and you do not need anyone's permission!

I think it is cool. And I do believe you have the owner's manual on yourself. My bet is it says that for better performance and attitude you must have ink of your choosing. Am I right?????
G

I love the execution of your idea! It looks great!